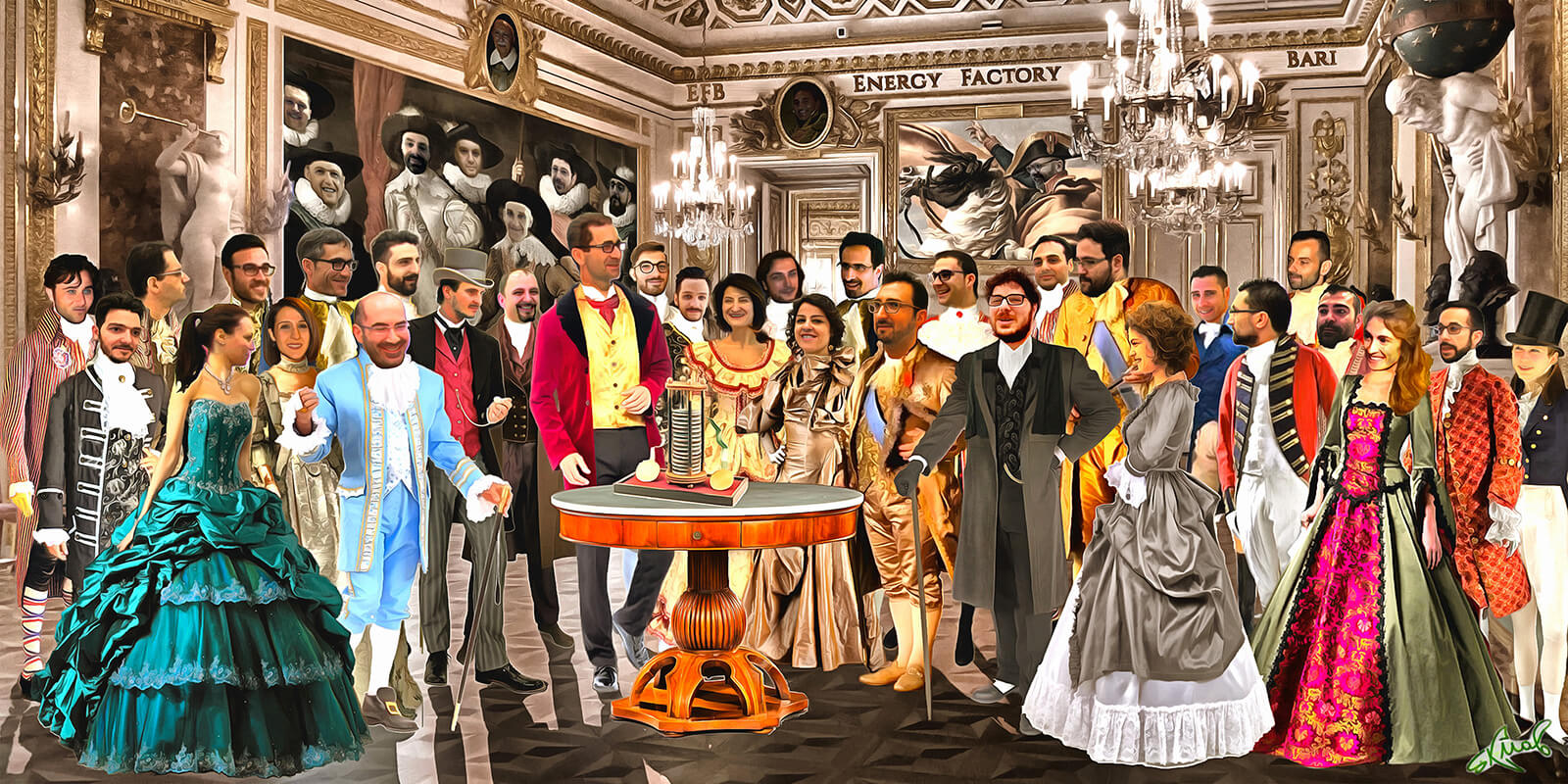 Not even Francesco Cupertino himself - born in Bari in 1972 - could have imagined that once he successfully completed his studies in Electrical Engineering at the Polytechnic of Bari in 1997, he would become its dean.

"In reality, I was interested in the technical, tangible application of what I had studied. I wanted to work in industry," says Professor Cupertino. In the end, he managed to work with the companies, too, becoming a touchstone for a number of industrial corporations and, in particular, for Avio Aero. In fact, in partnership with GE Aviation's Italian enterprise, not only did he found the Energy Factory Bari (EFB) laboratory, but he also supported the establishment of the Additive Repair Development Center for the repair of aircraft engine components and, most importantly, shared an excellent development.

Last 2 July, Cupertino, full professor of Converters, Machines and Electric Drives at the Polytechnic of Bari, was elected to be the new rector with 59% of the votes, for a term that will last six years: the most decisive votes came largely from the students. The date may have been written in the stars, since the next day, July 3rd, marked the EFB laboratory's ninth anniversary.

What were the experiences and highlights of your career, starting withwhen you were a researcher and full professor?

"What dissuaded me from a career in industry immediately after graduating was the opportunity to do research at University of Nottingham. I was there for a year, and it proved to be a winning choice. Not only did I learn a virtuous and different way of performing research, oriented more towards end applications, but, at the time in that environment, we were already beginning to look at the hybrid-electric future of aviation. We were performing European projects in this field and a specialized center existed where electrical aeronautical systems were already being studied. Back in Italy, in Bari, I began to import and apply what I had learned: I opened the first laboratory with the university and began to collaborate with companies, trying to gather research opportunities in different areas. The area around Bari has a strong the electromechanical industry, so the first issues were related to robotics and automation. We worked on projects of international importance that involved the exchange of researchers between universities in different countries, and we took giant steps in applied research. This made me understand the value of collaboration and scientific comparison at the international level. Then in 2008, the financial crisis not only affected the resources allocated to research, but also to careers. For a long time, there was a hiring freeze for public companies and professorships were blocked. I only became a professor in 2013, even though I had been receiving professional offers(from public and private parties) from Italy and abroad for some time. But I was determined to stay in Italy and specifically in Bari: I made it a matter of pride and affection for the area."

Last 2 July, Cupertino was elected to be the new dean with 59% of the votes, for a term that will last six years: the most decisive votes came largely from the students.

At that time, you met a few Avio Aero engineers and created the EFB, perhaps one of the first laboratories of its kind in southern Italy: how did it happen?

"Exactly: in 2010 I was on the verge of giving up and abandoning my university career, but then I received an unexpected contact from Avio Aero that introduced me to its university collaboration network. We shared our ideas and research experiences collaborating with industry. At that time, Avio Aero wanted to start research activities on electrical and electronic applications for aircraft engines, and after meeting various professors and university researchers expert in these disciplines were led to us. The prospect of starting this type of research was very inviting. It meant integrating increasingly more electrical devices and systems with the engine and its physical components. We started with the mission of creating a bridge between electronics and mechanics for airplanes. In this direction, my experience in England was useful as in that period I had contact with aircraft leaders like Boeing and Airbus.

At the EFB, advanced technologies for aircraft engines are studied: digital engine control systems, and systems and components for hybrid-electric propulsion. What will the winning solutions be in this field?

"Speaking of EFB, one of the most rewarding aspects for our work is undoubtedly the visits from aeronautical companies and institutions, universities specializing in the disciplines that we study at the laboratory. Their interest in our research, skills and tools has always made us proud and has led us to understand that what we do in Bari will have an impact on aviation in the coming years. When I look at the priorities for the future from a technical-scientific viewpoint, namely Environment, Energy and Mobility, I think that the EFB is linked directly to the urban air mobility of the future. Certainly, the crucial point of hybrid or full-electric propulsion is to guarantee its total reliability, flight safety. This means that efforts must be directed towards the certification requirements and towards the demonstration that aircraft powered in this way is just as safe, if not more so, than traditional aircraft. These efforts are achieved through research into the individual engine components, like the aircraft, and therefore required an ongoing dialogue with aircraft manufacturers."

The Polytechnic of Bari campus hosts another very important laboratory created with Avio Aero for the development of additive technology for the repair of aircraft engine parts. What is your opinion on this revolutionary technology?

"My role is to be the sole reference point for the collaboration between Avio Aero and the Polytechnic. Each laboratory also has researchers and managers from the university who work with the company's staff. The Additive Repair Development Center was founded thanks to this physical coexistence, to this continuous contamination of ideas and technology. If we had not been in the same place every day and had worked at a distance, we would most likely not have profited from certain benefits. In fact, this is the only way the needs of evolution and research were able to be understood, in technology where Avio Aero is a pioneer. It was the only way to meet all the needs thanks to skills and tools at our university and strongly oriented towards Additive. The Repair Development Center is proof of this benefit, and its current appearance is the version (on a larger scale) of the laboratories born in our department of mechanics.

Attracting technical-scientific talent is an essential mission for industry and for the country. Looking at the aerospace market, to what extent does the Polytechnic of Bari orient itself towards the demand for certain professional figures and how can training improve in the future?

"Large companies, like Avio Aero and General Electric, allows you to think big, starting with your university. That is, starting from the source of the talent, it allows you to expand the horizon for applications; to reach consumers, other industries; and to influence the welfare and technological level of the country. Dialogue between these parties is essential for orienting the educational offering and anticipating the employment market. Recent European studies confirm this thesis and place Italy among the lowest positions in a particular ranking, where it is basically stated that we do not adequately guide our scholars and their ambitions towards training courses that guarantee full and stable employment. And it is not a matter of a regional shortfall(the center or the north of the country, for example, do not do any better than Bari); rather it is a question of adequacy, effectiveness of training. The solution begins with orientation at home and the choices that are made in the middle or high school. In fact, the market continues to tell us that there is a demand for skills and professionals, which are difficult to find. Yet there is an abundance of graduates and undergraduates have difficulty entering the working world. Very often young people do a job for which they are not prepared. They learn it on the job. This happens because the academic world is closed to the outside, reasoning in a self-referential manner. This does not happen at the Polytechnic of Bari. and it will occur less and less for many other top universities. The absolute recipe for success is to open up to the outside world, to the evolution of work, and to the vision of how things will be in 10 to 15 years. The time frame that interests the student."

"From a technical-scientific point of view, the priorities for the future are Environment, Energy and Mobility: I think that the EFB is linked directly to the urban air mobility of the future"

A good number of talents are mostly women: in your opinion, how much more is needed to promote or invest in STEM careers (science, technology, engineering, and math)?

"The simple fact that we are talking about women in STEM , and that men are talking about it, is already an anomaly. Women should not be hired instead of men just to make the numbers for promotional purposes. Given two equal candidates, a research, study or work environment will certainly benefit when it is rich in diversity, multicolored and "multigendered". Gender balance is something to strive for; but if we look at the ordinary female researchers or colleagues at the Polytechnic we are still at tragically low levels. Again, the solution could, and in my opinion should, come from career counseling and professional development. As early as in high school and when starting their university studies, young women should made aware of all the careers, aspirations and professions open to them. That is to say, any career. The entry threshold must certainly increase, in favor of studies but also, and more, of the academic professions.

And the Winner is...

Avio Aero sponsors EBEC, the competition deemed the "Champions League" of engineers in the university world, which rewards the brightest minds during the final ceremony.