Demonstration tests underway in Prague using Sustainable Aviation Fuel have provided initial insights to the joint teams of CVUT, GE and Avio Aero, who are now aiming to run with 100% SAF.

A little over two months have passed since last November, when the Turboprop business and the Czech Technical University (CVUT) in Prague started the demonstration test campaign for the use of Sustainable Aviation Fuel (SAF) on the Catalyst engine, as part of a wider technological collaboration program between the company and Czech universities.

SAF are lower carbon jet fuels made from plant oils, algae, greases, fats, waste streams, alcohols, sugars, captured CO2, and other alternative feedstock sources. By starting with alternative feedstocks instead of fossil fuels, CO2 emissions can be reduced over the fuel’s lifecycle, including during production.

Testing with the SAF-powered Catalyst took place at CVUT’s dynometric test cell located in the Czech Aerospace Research Centre (VZLU) test center, a stone’s throw from the Turboprop headquarters in Prague; this same room hosted the engine’s high-power tests in 2018. As of today, over 3,000 hours of test operations on 17 assembled engines have involved the new European-born advanced turboprop engine.

"This campaign differs from classic endurance tests," explains Massimo Giambra, senior engineer in Engine Systems for Avio Aero. "In fact, we alternated tests using traditional Jet-A jet fuel with tests using a 40% SAF blend. We have accumulated 30 hours of engine activity so far, 10 of which are using exclusively SAF. From the point of view of performance, consumption, power and general behavior of the engine, we can say we are satisfied. According to initial results, Catalyst responds in the same way with both fuels, although we're still deepening our analyses."

A completely new engine, developed after more than 50 years without all-new turboprops launched on the market, clearly puts designers, technicians and engineers in front of unprecedented cases. That's why the Catalyst undergoes certification and development testing that other turboprop engines have never faced.

The demonstration with SAFs, in this case, has the primary objective of comparing engine emissions and exhaust smoke between the two fuels. "The objective was not the certification for smoke and emissions, however we performed and measured the activity adhering to ICAO eco-sustainability parameters (the International Civil Aviation Organization part of the UN, ed.). In fact, among the requirements of the program is the reduction of emissions and smoke. We can already say that, so far, the results suggest a decrease in smoke emission at full load of 25% with this type of SAF", adds Fabio Turrini, Combustion Systems Design Consulting Engineer for Avio Aero.

The type of SAF used by the Catalyst in this first phase is called ATJ (Alcohol To Jet) and is produced through a process of reconversion of ethyl alcohol into fuel, alcohol that can be extracted on the planet from various renewable sources such as sugar cane. “Initially, we intended to use this SAF at 50% but, to meet international certification standards, it’s been used as a 'drop-in' only at 40% so we mixed it with Jet-A for the remaining 60%,” says Martin Svoboda, Project Manager for Turboprop who followed engine tests closely with colleagues from CVUT University and teams of specialists.

A graph showing the comparison of non-volatile particulate matter (nvPM) between SAF and traditional fuels.

"We were preparing for this campaign as early as 2020, then the health crisis affected our schedule," continues Svoboda. "The complexity of these tests starts right from procurement here in Europe, as it took us a long time to find the alternative fuel: many of the large manufacturers are not interested in direct stocks for experimental purposes, so we found a small but advanced manufacturer in North Carolina (USA) and ordered over 2,300 liters of ATJ in total."

It is also easy to imagine how delicate it is to deal with such substances and therefore, together with the Engineering, Program Management, Testing and Sourcing teams, the Environment Health & Safety departments of the Prague office were activated as well as a specialized external supplier. Operations included the transport, use, storage and circulation of the two types of fuel in the pipelines of the advanced test cell dubbed "DYNO test cell".

"The assessment of the performance with SAF, as well as their effect on emissions, air pollution and human health, requires a thorough preparation, design and execution of the tests, so that you can separate the effects of the fuel from a myriad of other effects," says Michal Vojtisek, Professor of Mechanical Engineering at the University in Prague and Resident Alchemist. An expert in fuels, combustion and emissions, Prof. Vojtisek was one of the pioneers of ground vehicles’ emissions measurement during the 1990s, gaining experience also in the United States.

The testing specialists teams inside the control room during an engine run.

"When selecting instrumentation and test sequence for this campaign, we were building on our experience in vehicle testing as well as on the recent development in aviation engine emissions tests. We have digitally analyzed the exhaust for a variety of pollutants, including greenhouse gases like CO2, methane and N2O, at reactive nitrogen species, concentration of non-volatile soot, size distributions and total counts of particles along with the total count of non-volatile particles", explains Prof. Vojtisek. Together with him, there is a team of 10 CVUT technicians and researchers who have undergone dedicated training, specializing in a discipline which is key to the study of climate and health impacts.

It may seem obvious, but being able to filter, analyze, and measure a gas stream accurately is a rather sophisticated operation. The piping system in the test room is equipped with sensors, as are the exhaust pipes: "the system we have in the room is flexible enough to adapt to a certain type of tests in a relatively short time. Since it is quite difficult to procure SAF, everything needs to work correctly right from the first run, there is not much opportunity. These tests were aiming at a realistic assessment of gaseous and particulate emissions with the SAF by comparing it with conventional JET A-1 fuel."

The next step is now within reach of the joint company and university teams studying and implementing more sustainable solutions while maintaining the high operational standards of the brand-new engine. "We're aiming to operate with SAF at 100% - which does not require blending with conventional jet fuel - as soon as possible," says Svoboda. "This time we are also looking for a SAF supplier to support the test campaign. It would be nice for it to be European like our Catalyst." 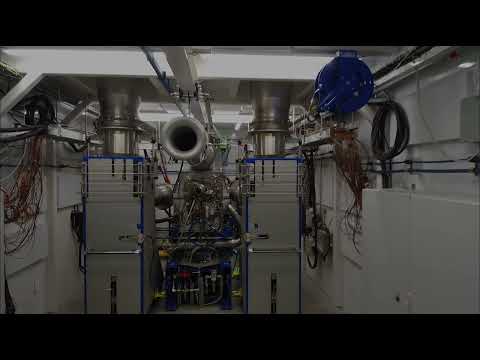 Additive for repairs: beyond design and manufacturing

In partnership with Politecnico, the META project that began in the Bari laboratory, has opened up a series of advances for repair techniques and mechanical transmissions.

The RACER comes to life

The next-generation hybrid helicopter is approaching the flight campaign, with its advanced transmission systems developed and produced in a special collaboration with Airbus Helicopters.