From Berlin’s to Wichita skies

The Catalyst engine’s flight test campaigns in two different continents are progressing, and the first insights from the new Beechcraft Denali prototype are yet remarkable.

If one never forgets the first time, 2021 will certainly remain a memorable year for engineers, testing and tech specialists at GE Aviation and Avio Aero. From the skies of Berlin, which on last September 30 greeted the maiden flight of the new Catalyst engine on the experimental Beechcraft King Air 350 aircraft, to those of Wichita.

The Kansas famous city boasts a centuries-old tradition in aeronautics: in 1910, hot air balloons were already floating in its skies and the first Aero Club was founded there in 1915. The first airplane built in those parts in 1911 was the work of a certain Clyde Cessna - a farmer from the close town of Rago - who shortly afterwards started his business in North Wichita and six years later built the Comet. Within another four years, the Wichita area was already home to brands such as Swallow, Travel Air, Cessna and Stearman: the grand total of aircraft produced here was greater than any other in the United States.

A legendary history, which Paolo Peraudo - Senior Performance Engineer at Avio Aero and member of the expedition comprising technicians and engineers from Avio Aero and GE who followed, step by step, the preparation and execution of the first flight of the prototype for the new Beechcraft Denali last November 23rd - rediscovered and shared with his colleagues. "The American Chamber of Commerce of Aeronautics named Wichita the capital of the air in 1928 and since then it has obtained this title on several other occasions" says Peraudo, "so much so that it is now called the 'air capital of the world'".

The Avio Aero and GE Aviation experts who supported Denali's first flight on the field.

"It is almost impossible to describe the feelings we had when the aircraft landed. Suddenly, all our hard work and sacrifices made sense"

On that morning of November 23, at the first light of dawn under a crystal clear sky polished by a light breeze, Peraudo was there at the runway’s side together with his colleagues and the team of Textron Aviation, the launch customer for the Catalyst. The two pilots were there even with their families, attending to celebrate and enjoy that special moment.

"During the first flight I was lucky enough to sit next to the Textron Aviation team and communicate directly with Pierpaolo Forte and Alvaro Hernandez, our colleagues who were monitoring the engine and the various parameters from the telemetry room," continues Peraudo. "It is almost impossible to describe the feelings we had when the aircraft landed, suddenly all our hard work and sacrifices made sense. Accomplished there, before our eyes."

Textron Aviation is the aircraft manufacturer, and world leader in its sector, which today carries the historic crest at its Wichita headquarters, along with the famous Beechcraft and Cessna brands. The prototype for the new Beechcraft Denali, last November, flew for 2 hours and 50 minutes during which the performance and stability of the aircraft, as well as the propulsion system, control systems and avionics were tested (and appreciated) by the two test pilots. 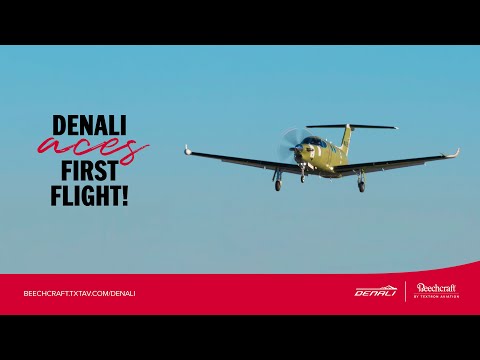 "I enjoy everything I fly, but especially the aircraft I’ve helped develop and certify. I have a passion for aircraft that perform well and are simple to operate," said Textron Aviation's Chief Test Pilot, Dustin Smisor, who has more than 23 years of experience and more than 5000 accumulated flight hours. "The Denali first flight was one of the highlights of my career. It was something I had been looking forward to for a long time. I enjoyed every minute of that first flight and the excitement surrounding it."

The Catalyst can count on a FADEC (Full Authority Digital Engine Control), the system that integrates in a single lever the propeller and engine controls ensuring better control and greater responsiveness for the pilot, whilst also simplifying the integration between propeller and avionics.

Smisor’s excitement for the first flight is also due to relational and atmosphere on the testing field. " I have enjoyed working with GE, especially the onsite team here in Wichita. It is great to glean from their expertise and work towards a common goal."

The Denali already attracted much curiosity on the aeronautical scene also thanks to its innovative technologies. " Denali is full of new features such as auto-throttle, single lever control, Full FADEC engine and prop control", said the Denali Program Manager, Ernie Krubsack. "Pilots will enjoy flying this aircraft."

The two test pilots that flew the Denali prototype for the very first time, Dustin Smisor is on the right.

"Denali first flight was something I had been looking forward to for a long time, I enjoyed every minute of that first flight and the excitement surrounding it"

Krusback is an industry expert, who joined the aviation industry in 1980 and who has been with Textron Aviation since 1992, and he is looking optimistically at the future of the Denali. "It’s characteristics make it a highly versatile, universal and very efficient aircraft, so much so that since the first flight in November, there has been an increase in interest in it around the globe,” Krubsack added.

The Denali has all the requirements to carve out leading accreditation within the industry, along with its brand-new Catalyst engine, which in the meantime has yet collected 150 flight hours and over 3000 hours of operation in tests and certification trials. Relevant numbers for an engine developed and built from a blank sheet of paper, in the not so long ago 2015.

“The new engine design and efficiencies have been very impressive to this point," concludes Krusback. "It’s a versatile product for both the sports adventurist, as well as the business personal. It will serve both purposes in a compelling way”.

Images and video of the Denali in page are courtesy of Textron Aviation.

Caselle is home to a unique operations center for Eurofighter Typhoons and their EJ200 supersonic engines, dedicated to the Italian Air Force as well as to a new export customer.

A new technical-logistical support pattern for the Air Force Super Hercules at the Italian Air Force base in Pisa, where our experts take care of the mighty turboprop engines.