One thousand and counting...

Celebrated, at Torino Caselle airport, the five hundredth Typhoon and the thousandth EJ200 delivered to the Italian Air Force.

It was 27 March 1994 when the very first Eurofighter Typhoon prototype successfully completed its inaugural flight. Since then, this paragon of flying excellence, created thanks to Europe’s biggest industrial collaboration program (primarily involving the aeronautical industries and governments of Italy, the United Kingdom, Germany and Spain), has clocked up approximately 400,000 hours of flying time. Adopted by the air forces of Italy, Germany, the United Kingdom, Spain, Austria, Saudi Arabia, Oman, and recently Kuwait, the Typhoon is currently the largest industrial collaboration program in Europe, with 599 aircraft under production contract.

Powered by EJ200 turbofan jet engine, the Typhoon is the new-generation defense aircraft with the best operational safety levels in the world and featuring state-of-the-art technology with the goal of ongoing improvement and evolution. With the largest number of units under production contract in the world, it is also Europe’s biggest industrial program in the defense sector. 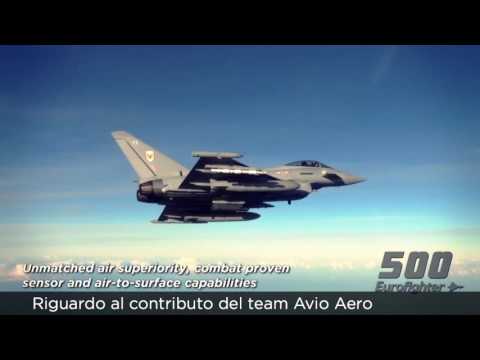 The ceremony for delivering the 500th to the Italian Air Force happened on Tuesday April 11 in a hangar belonging to Leonardo Aircraft at Caselle: many prestigious guests, among them there obviously were the air forces’ delegations part of the Eurofighter platform, as well as the partner companies of both Eurojet and Eurofighter consortiums. Avio Aero, since the beginning member of Eurojet consortium, is responsible for the design and production of 21% of this remarkable engine: its accessory drive train as well as that of the aircraft (the AMAD, aircraft mounted accessory drive train) and the low-pressure turbine are produced in the Rivalta plant, the afterburner (heat shield) and APU (auxiliary power unit) are produced in Pomigliano, and the Brindisi plant – a dedicated overhaul and maintenance center for the Italian Air Force – deals with the servicing and  the assembly, even testing the whole engine in its large testing cell.

EJ200 is a flagship program for Avio Aero, a jewel of technology and power that, to this day, is a testimony of absolute excellence, as Gary Way, Eurojet Technical Leader, has commented: “Today we are witnessing a further major step in this program. Through a journey that has lasted 31 years, even the figures for the engines alone are quite amazing: 750 thousand hours of flying time and over 1,200 engines delivered! In all of this, the contribution of Avio Aero in terms of supplies, design, operations and delivery is absolutely key. Without it, the engine could not have been so successful, and in thanking the whole Avio Aero team I would like to encourage it to continue and to strengthen its commitment to this European success with passion and drive for excellence.”

Thinking about present achievements brings to mind all the work and ingenuity that have gone into it over the past decades, as our Engineering Leader, Giorgio Abrate, recalls: “Working on the EJ200 program has been a truly formative and at times very exciting experience. The first engine was tested at Sangone and the first test flight at the Flight Test Center in Caselle. We have been very fortunate to live these experiences and share them with our colleagues. It has been a formative adventure from a technical standpoint, but also an experience of Europe, of dialogue as well as of sometimes harsh exchange, of competition, but also of great help and support among partners. It has been a wonderful journey that has made us grow and has laid the foundations for a great deal of Avio Aero’s leadership today.” Caselle is not only the site of a military airport and of a Leonardo Aircraft Division facility, but is also the operating centre of a team of Avio Aero specialists in overhaul, assistance and support for military engines. Their work and that of many others at Avio Aero deserves special mention because it started well before the celebration of the 500th aircraft.

So, going back to this milestone, some important memories come to mind also in terms of the commercial and program management aspects. “It’s a great pleasure to participate in this celebration – stated Senior Operation Manager, Clemente Pescarmona – since the EJ200 engine has been part of virtually my whole career in the Company. I would say it’s a unique program, both in terms of the engine’s level of performance and reliability and as an example of collaboration between different countries and industries. In my view, it has also been one of the best drivers of our company’s technological and industrial growth.”

Seven thousand tons sailing at up to 27 knots, thanks to the turbines Avio Aero installs on the FREMM vessels.