Quite more than a week has passed, just long enough to get to work with a calculator on the thousands of pages of press releases and news issued: this year's Paris Air Show had 3% more exhibitors than two years ago. 2381 exhibitors of all sizes presented their respective product and technology offerings across the 94 thousand square meters of Le Bourget airport. Of the 290 government and defense delegations which visited the global event, pride of place obviously went to newly-elected French President Emmanuel Macron, who also took a flight on the Airbus A400M. Who knows whether he is aware that the huge turboprops of the gigantic French transport aircraft would not have been turning without Avio Aero's high-tech power transmissions (including above all a very complex design) revolving at very high speed behind them?

The value of the agreements announced or reached at the event totaled 150 billion dollars, and the mathematical data clearly recognize GE Aviation as one of the major contributors to this whole air show’s amazing result. With its 31 billion dollars in orders and commitments at Le Bourget, GE accounted for practically 20% of the total: the lion's share of this awe-inspiring haul was provided by the CFM engines (first LEAP, then the iconic CF6-80), and also by the innovative TrueChoice digital service and maintenance offer.

The list of airlines and customers that chose GE is quite vast, and a massive number of civilian aircraft ordered or purchased during the seven days of the Paris show: 934, including obviously, a large tally of orders for the brand-new Airbus A320neo and Boeing 737 Max, equipped with the LEAP engine.

Avio Aero, and its sales team in particular, "took to the field" again this year: lots of successful meetings, discussing future development and technology enhancement scenarios, and offers drawn up with our main partners and customers (EPI, Airbus, Boeing, Safran and Leonardo, to name just a few). We were also particularly happy with the visit paid to the GE chalet by General Francesco Langella, Director of Air Armaments and Airworthiness and Chief of the Aviation Engineer Corps, with the Italian delegation, welcomed by Riccardo Procacci. Commenting on the show, Procacci's feedback was positive: "we offer the Italian Air Force solutions which enable them to exceed the forecast life cycles of products in operation in their fleets. Moreover, it is our constant aim to increase business with our third parties, and the +10% in our backlog, for which we received praise from David Joyce at the air show conference, has been generated by these efforts."

Riccardo Procacci's analysis contains these and other fascinating comments, especially in terms of innovation and growth for the aero engine programs of tomorrow, through what has now become intensive use of additive technology, not to mention the mission to expand within the European area. Click Play below. 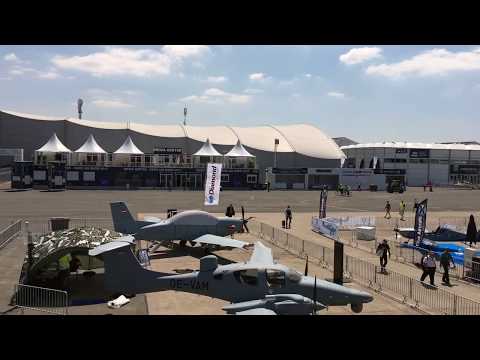