Aircraft operators' essential needs, with regard to aviation engines in service, can be summed up in two words: efficiency and reliability. The system Avio Aero is carrying out for servicing these engines, through its Repair Stations and research laboratories, could be analogized to a 'brain and hands' concept. The final aim is to maximize the efficiency and reliability of the repair and maintenance services offered. Crucial within this system is the research and development work being conduced by the ‘brain’, the Apulia Repair Development Center, which started its operations at the end of 2016. It is here, inside the Polytechnic of Bari Campus, that the first real repair development operations using additive techniques (i.e. with the addition of metal) on real aircraft engine components have begun. Once developed and certified, these activities and processes will be ready for implementation at Brindisi or Pomigliano Avio Aero’s Repair Stations (that are the 'hands').

The partnership with the Polytechnic of Bari was born in 2010, today the site comprises a total of 3200 sq.m. facilities and open spaces resembling typical engineers’ workplaces, where engineers of different ages, academic backgrounds, or geographical and professional origins, work side by side, designing and studying not just the additive repair techniques. In fact, the site is also a base for GE Aviation and Avio Aero engineers who work on development programs such as ATP (since last March 2018 officially renamed GE Catalyst) and GE9X, and on innovative research for engine control systems and hybrid electric propulsion: this other laboratory, hosted in the same building and named Energy Factory Bari, involves both researchers and professors from the Polytechnic too. All the labs in Bari are therefore interconnected with the GE world network of Global Research Centers, because knowledge and experimentation achieve their maximum potential when shared. 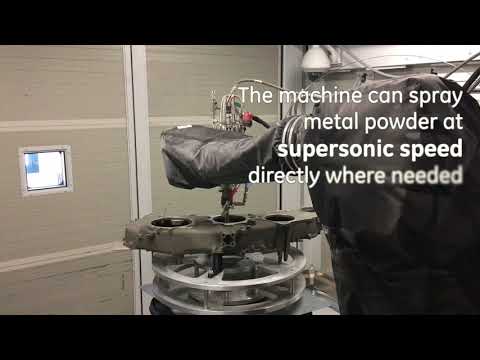 But the Apulia Repair Development Center’s team is the only one using the additive technology machines installed in a large room inside the complex: the Cold Spray and Laser Deposition. It is thanks to these two machines that research and design are able to take on real form, enabling empirical studies. These two technologies' fundamentals fulfill all the expectations now associated with additive processes: efficient management of complex geometries and reverse engineering. In other words, the latter stands for the direct transition from the screen to physical construction by means of a process which adds powdered metallic material to an engine’s part.

The basic concept is therefore the same, except that here the process doesn’t begin with a CAD (computer-aided design), which is then 3D-printed using the EBM or DMLM techniques; instead, a real aviation engine part is scanned or digitalized before being repaired or reconstructed. Recently, the Cold Spray technology developed in Bari achieved a major, genuine milestone: it was applied to a GE Aviation component for the first time. The part in question was the accessory gearbox of the iconic GE90, which powers the Boeing 777 long-range aircraft.

What cold spray does is fascinating from the point of view of the physics involved: the plant consists of a chamber measuring about 4.5x4.5 meters, with in the middle a gun operated by gas (nitrogen or helium), which can spray metallic powders at supersonic speed onto a workpiece mounted on the system's central plate. “Every single metal particle from the powder-charged gun attaches to the part (or portion) of the component for reconstruction or repair due to the effect of the kinetics, and the gun functions cold, differently from additive technologies which use laser or electron beams, generating heat. This provides another major benefit, since the physical and mechanical properties of the component are unchanged, while the metal fusion process is still perfect," explains Giulio Longo, who coordinates all activities on the two systems in the Bari laboratory.

After the GE90, the aviation engine components involved in these repair development activities will also include programs such as the GEnx, CF6-80, CFM56  (the best-selling engine by CFM, a Safran Aircraft Engine and GE joint venture)  and LM2500, and also other third-party programs. This will generate the widest, most variegated experience possible for civil aviation engines installed on the aircraft we use for domestic or intercontinental flights, for example. The components concerned are not only casings but also housings (belonging to power or accessory gearboxes) and tanks, through to gearings and other complex design parts.

And the powders of a large number of metals, or rather alloys, widely used in the aviation industry, can be applied using this technology. They include steel, aluminum, magnesium and titanium - and naturally, also the most famous alloy: TiAl (titanium aluminum), used for the LPT blades of the state-of-the-art GE9X engine. In fact, the other technology being trialled at the Apulia Repair Development Center, Laser Deposition, is particularly suitable for TiAl; currently in the test phase, this technology will be applied to real engine parts in the very near future. In this case, the powder is deposited on the piece for repair or portion for reconstruction with an extremely high precision laser. Laser deposition is ideal for very thin or small components which are difficult to weld or recover, such as the turbines’ blades or nozzles.

Last but not least, we must not overlook an incredibly important aspect of additive technology, which implies benefits for the environment as well as for the customer: the potential for replacing and repairing parts, avoiding the costs of new parts and reducing raw material consumption. There is no wastage of powder (cause the powder exceeded can be reused, as for the typical additive processes) and in terms of emissions and noise the process is infinitely superior to traditional processes.

Give me your eyes

Smart glasses, experimentally developed inside the Avio Aero Services area, are opening a new chapter in the industrial digitalization.