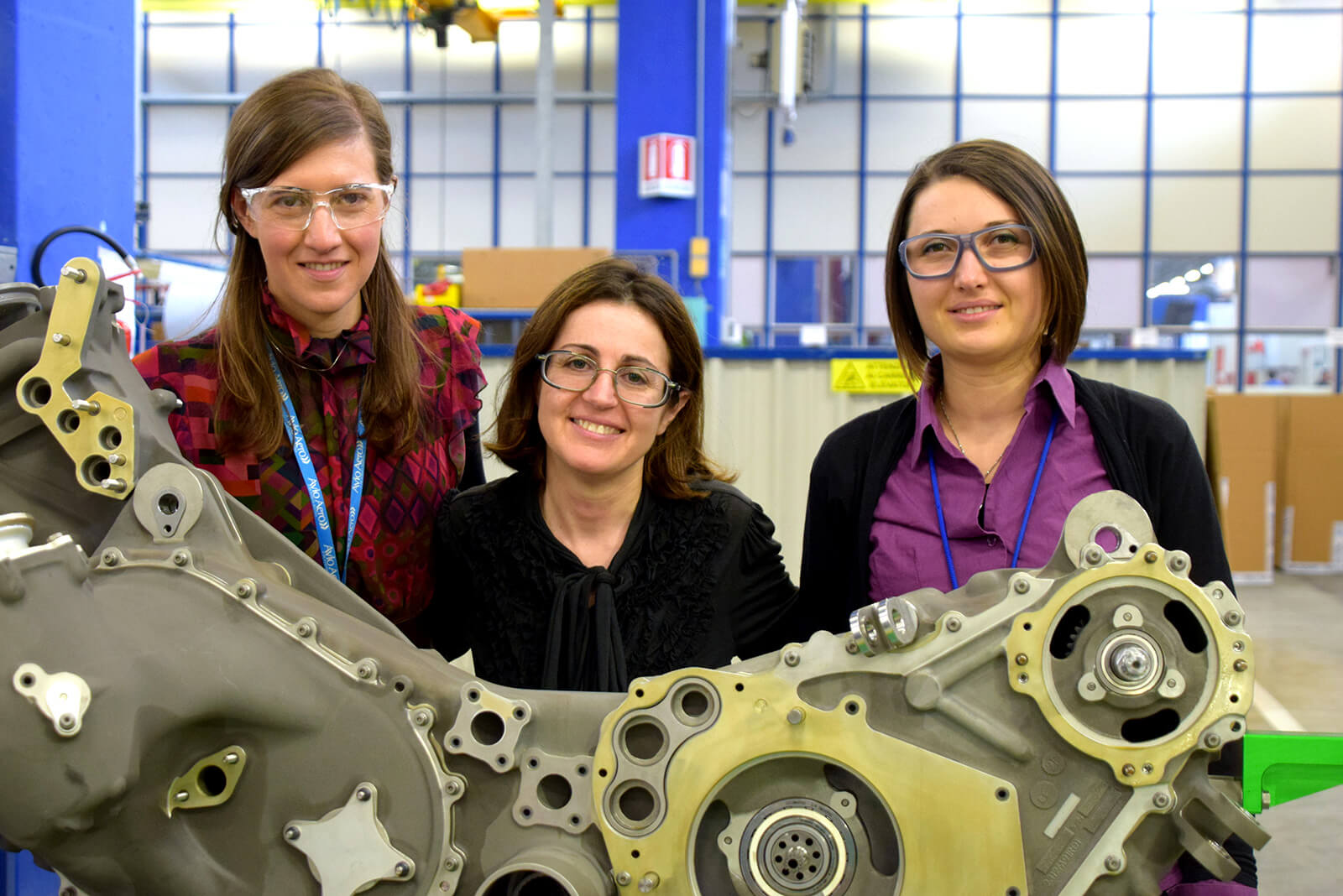 Just like many other little girls, even Rosa Pisani as a child dreamed of becoming a ballet dancer, yet life took her in a completely different direction. Today: no ballet pointe shoes and tutus. Safety shoes, sweatshirt, academic preparation, brilliant determination and resilience are the daily clothes to put on in a predominantly male environment between engines, futuristic machines and economies of scale.

Rosa is one of the many women who have discovered the passion for the STEM subjects (Science, Technology, Engineering and Mathematics), subjects which still sometimes present a remarkable gender gap between female and male participation. Such gap, from the school desks, also shows up later on the job as gender inequality.

In Rosa’s case, her passion for these subjects led her to obtain a bachelor’s degree in aerospace engineering and since 2017 she’s Head of the Gearboxes Business Unit at Avio Aero Rivalta plant. That is, in other words, the area where gearboxes are assembled, tested and inspected: at the heart of manufacturing. Rosa’s sources of inspiration and guiding horse have been two men: his father and Corrado Guidi, "I met Corrado in 2010 thanks to an initiative by Valore D, and he’s still today my mentor and guide," says Rosa.

Her journey has been non-stop: “Right after graduating, I joined GE in the commercial division of GE Power. Then I moved to engineering with the role of technical representative for sales and finally I joined the supply chain at BHGE (formerly GE Oil & Gas). That's where my passion for manufacturing was born ... I’ve been a test room supervisor, a Master Black Belt, then an Assembly Cell Leader, a Blades & Buckets Plant Manager and also Manufacturing Quality Manager.

In September 2015 I arrived in Avio Aero first as Head of Quality System and then I entered my current role, Senior Operation Manager. I had the chance to live many domestic and international work experiences, especially in the early years of my career when my role included frequent contacts with customers abroad: France, Norway, Asia and Middle East. "

What motivated Rosa to work in the heart of production, on the shop floor, is the opportunity to see the product taking shape and its construction. "It is really exciting because in the factory you can have an intense bond with the team and foster the sense of belonging to the company."

In the Rivalta gearbox assembly area, the STEM component has become (and will continue to be even more) a very important reality thanks to an all-women team made up of Rosa Pisani, along with Rosa Forgione and Carolina Bogdanas. “Rosa Forgione is our Lean Leader who led the team in the lean transformation of the assembly lines. She has been part of GE for 7 years, 4 of which at Avio Aero, she has been the EJ200 Master Scheduler and represented the company in the Eurojet production working group "- says Rosa Pisani.

"While Carolina is the Test Cells Supervisor and thanks to her determination and her gentle approach, she has greatly contributed to the success of the whole team. She has been with Avio Aero since 2017 and is currently following the OMLP program. Moreover, in the previous rotations, she worked in the Rivalta Transmissions Lean area and in the LEAP LPT Cases Manufacturing Engineering at Avio Aero Brindisi. "

Another aspect of their work, perhaps an even more thrilling one as Pisani says, is to see the completion of the final product and its delivery to the customer: “it gives an adrenaline rush every day in carrying out our main mission, the product delivered on time and with high quality.”

But, talking about their daily work, if you ask them what is something they don't like to hear and what do they repeat very often, the answer comes immediately. "It makes us angry to hear ‘Why do I have to do it?’ And we repeat often: we can do it!".

In the end, with regards to prestigious STEM women known worldwide, Rosa confesses that she would have liked to meet Edith Clarke. "She was one of the women who made the history of technology. Edith in the first half of the 20th century was not only the first female engineer, but also the first teacher to obtain a professorship at the University of Colorado. After studying astronomy and mathematics, she studied Electrical Engineering at the MIT in Boston, where she graduated the following year. She was then hired by General Electric and, thanks to her love of mathematics, she invented a calculator (called the Clarke calculator) capable of performing some types of calculations up to 10 times faster than other instruments. "

In comparison to the last century, great steps forward have been made in encouraging and increasing numbers of women to enter STEM fields, and the women team in the Gearbox area at ​​Rivalta is a concrete example of this. However, it is essential to continue in this direction in order to achieve, within a broader framework, the goal of “Gender Equality” included among the 17 Sustainable Development Goals of the 2030 Agenda, signed in 2015 by the governments of the 193 UN member states.

To date, women hold less than 30% of the jobs in STEM, which include the fastest growing and most remunerative professional sectors, particularly in low-middle-income economies. In Italy, the percentage of women who occupy technical-scientific positions is among the lowest in OECD countries: 31.7% against 68.9% of men and only 5% of 15-year-old Italian girls aspire to undertake technical or scientific professions (OECD, Istat and Eurostat data, ed.). Unfortunately, stereotypes and prejudices that girls may encounter in their professional lives can still be an obstacle to breaking down gender barriers.

Several realities are mobilizing to bring the girls closer to the STEM world, one of those is the newly formed "STEM by Women" which brings together technical or scientific companies on the territory with the aim of raising awareness among the female young students on these issues through events, seminars and conferences.

And Rosa's advice for a young woman student who wants to pursue a career in STEM field is: "Create yourself excellent bases, be determined and stand out from the crowd. But above all: be always yourself!”

The women and technology binomial as described by one of Avio Aero professionals, throughout her real-life experience of commitment, efforts and success.

Riders on the jet engine

It is not just a coincidence that the professional DNA of some aircraft engines’ service specialists is enhanced with operational expertise in the field of motorcycling.