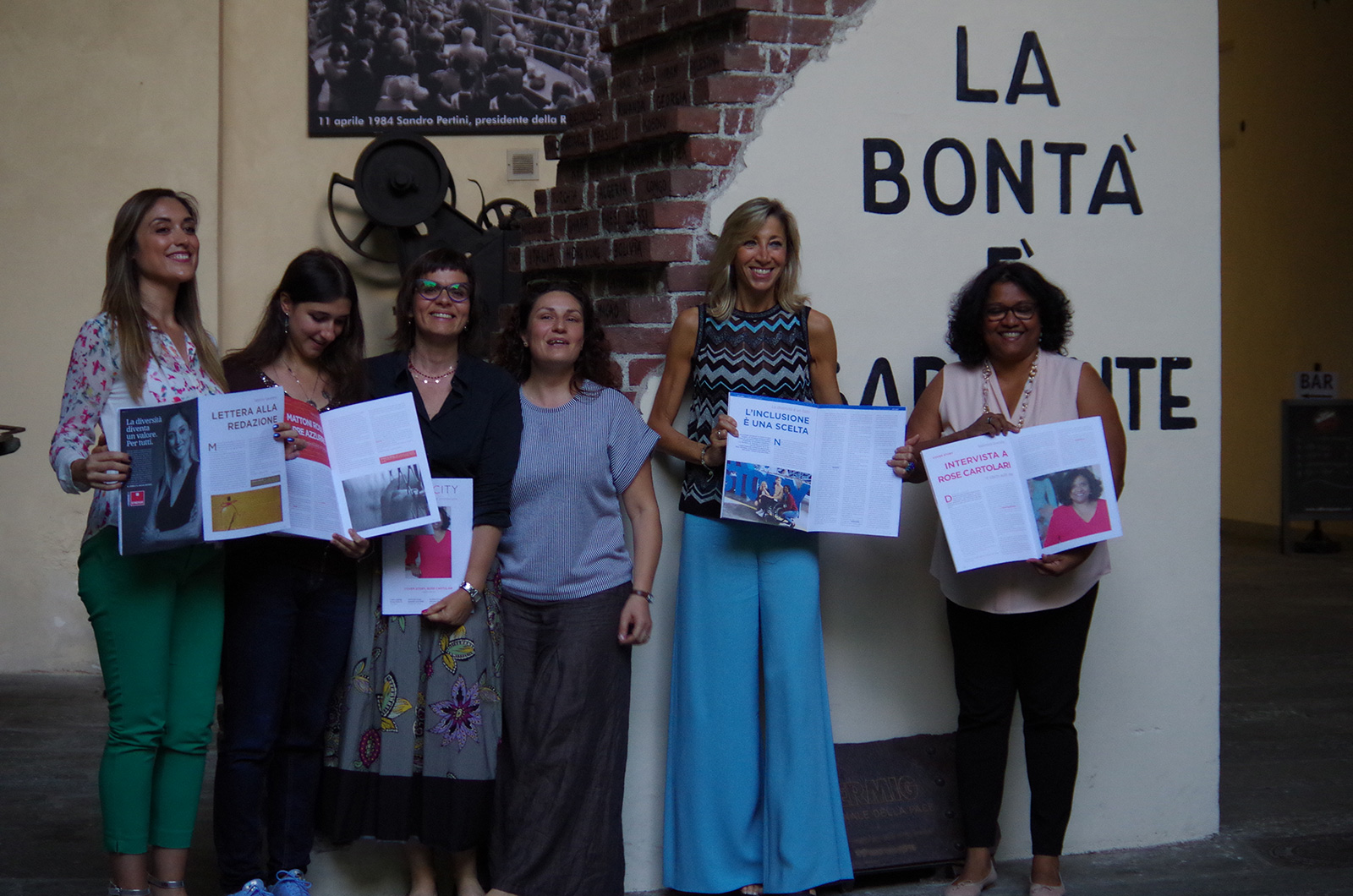 The stories of Jocelyn and Federico, two youths united by a path in Avio Aero, hosted on the last issue of DiverCity mag, an editorial project that interweaves the topics of inclusion and innovation.

Valentina Dolciotti is a D&I business consultant and for the past few months, she has been the director of DiverCity, the first European magazine dedicated to inclusion and innovation. "DiverCity was based on the idea of the assistant editor Tiziano Colombi, that is to collect in one magazine voices, passions, projects, initiatives, and opinions on the topic of inclusion, which I deal with every day with much passion and effort” says Dolciotti. “Since a magazine that tells all the diversities (a very high ambition), not just the most fashionable or the most ‘comfortable’, is something that I would primarily love to have on my bedside table every day, a point of reference."

Valentina also reveals emotionally about how the free magazine’s name was invented: "I owe a debt of gratitude to my friend and writer Davide Sapienza who, in an interview some time ago, playing with words tossed out this title, in my opinion a very, very good one." And so, more than a year after the start of this adventure, the third issue was presented at the Arsenale della Pace - Sermig in Turin.

"Valentina's project is important. Our country has a great need to raise awareness on these issues and now we are going in the right direction," says Carlamaria Tiburtini, D&I Leader of Avio Aero and presenter on the panel. "For us, this issue is even more special as it tells our people’s story on Diversity, but especially our choice to be inclusive." Indeed, browing the mag last issue’s pages there are the stories of Jocelyn and Federico. Two youths with completely different path in terms of gender, origins and past, but with one thing in common: Avio Aero.

Jocelyn is beautiful. With no doubt. She was born in the Congo in 1992 and she lived there until the age of twenty-six, after graduating with a degree in Business Communication. She had to leave the country and her family for political reasons and arrived in Italy, alone and without papers, in February 2018.

She was taken in by Sermig in Turin, which has transformed an old disused arms factory into an arsenal of peace, open 24 hours a day, where different cultures, religions and formations meet to get to know each other, to dialogue and to cooperate. Sermig provides hospitality and support to single mothers, prisoners, foreigners and those in need of care.

Avio Aero has been collaborating with Sermig for a long time and it is along this crossroads of destiny that Jocelyn came to the company. Not long ago, she began an internship that aims (also) to accumulate working hours for the recognition of the degree she obtained in the Congo. On this new path, she is supported by two tutors, who help her in specific tasks and also in building a personalized working method, which she will be able to use wherever she wants to work in the future.

Because it was clear from the beginning that Jocelyn's presence is an exchange of skills, a mutual enrichment, both for Avio Aero and herself. Her life experience, the different languages she speaks, her previous experiences are an added value and are just a starting point along her path of growth.

Weeks go by and Jocelyn gains self-confidence, the team supports her, she learns how the company "works" and she knows how to be useful.

Her initial doubts, her fear of not being able to contribute to the growth of "such a large and complex" company are gradually fading, and her desire to increase her skills has conquered all her fears. The desire for professionally growth spurs her on, perhaps one day her dream to become the Communication Manager of a company will come true. One thing is certain. Today, while her path at the company has just come to an end, her passion has found a home as well as her skills and competences has surely enhanced.

Federico is also young. Our meeting with him also sends us home much richer than when we arrived this morning. He was born in 1994, he is graduating in Economics and Commerce, in Genoa, and has a sweet and unsettling smile. Due to a car accident, his studies (and other activities) were interrupted for about two years. Today, Federico is a quadriplegic and talks about it with serenity, because this diversity does not describe him fully. It is only one part of the whole.

Just one year after the accident, he resumed his studies and plans to graduate next year. The accident did not stop him, on the contrary, it gave him an extra boost: using his studies completed thus far, he founded a start-up that designs and sells assistive devices for disabled people. A project that he has patented, in collaboration with the Polytechnics in Lausanne and in Turin.

Federico and Avio Aero met accidentally, again should Fate exist... the company, renowned for its inclusive policies, attracted Federico, who was interested in starting a university internship. Was it that simple? Bureaucratically, the activation of the collaboration was complex, but reiterated the firm will - on both sides - not to miss this opportunity.

Because this is, once again, an opportunity for growth, an added value for all the players involved.  The structure of the learning internship is 240 hours distributed over three months, the number of hours must be divided and organized in accordance with the company’s Smart Working policies from which Federico benefits. He tells us that the first days in Avio Aero were beautiful and stimulating, the safe environment that was created around him at times embarrassed him and he is concerned - typical of all those who feel like they did not arrive in life - that he have the skills to accomplish the tasks that are assigned to him in the best manner.

He has been entrusted with learning the processes of monitoring and managing Avio Aero's engineering budgets. In the office, he assists his colleagues in the progress of the processes, while on the days he works from home, he re-works the data, analyzes the data, and creates graphs to display it.

The opinions and impressions he brings to the office are unfiltered, external to the company dynamics, so he gives his colleagues "uncontaminated" feedback. He smiled revealing a small difficulty he encountered: the frequent use of acronyms in the Company, which are not always immediately comprehensible. We console him by saying that it is a common problem...

Technology, on the other hand, knows how to be truly inclusive and provides great support for some of the physical limitations to which he is subject: Avio Aero has put him in a situation of "fantastic, sometimes surreal" comfort and he feels serene and confident. Going to work and feeling at home is no small feat. He has two dreams: to create a family in a few years' time, and to create a new project in which technology makes life easier for people. Not necessarily people with disabilities, he specifies.

The Power of Disability