Smart Working is not really a brand-new practice at Avio Aero, also thanks to the efficient and seamless speed with which it was recently embedded into corporate culture.

The last few months have undeniably (and necessarily) seen an unprecedented intensification of connectivity and use of digital devices. As for work, just in Italy, for example, over two million people are now used to working from home, which is why nowadays there is a lot of talk about Smart Working.

The more experienced, or those who are more precise, also highlight an important semantic distinction: indeed, if connecting from home is the only way to work, it would be more appropriate to talk about Remote Working, because the Smart adjective indicates a more flexible and efficient way of working by connecting from anywhere other than your office.

In the case of GE, which today sees about 180,000 employees in the world connected remotely (in February there were 120,000), this practice has been in vogue since its early adaption in America in year 2000 and is therefore more appropriately called Smart Working. Since then, this type of work culture has involved more and more workers in the group and has gradually been adopted overseas. In the case in point, GE Aviation currently has 24,000 employees connected, double the figure for February of approximately 12,000.

Although several of GE's businesses in Italy, including Avio Aero, had already implemented Smart Working for certain teams and professionals in 2018, Nino Atzei, Leader of the Digital Team and Aviation Operating System at the company headquarters in Rivalta di Torino, understood the potential of this practice from well before. In fact, in 2016 - as part of his long professional experience that began after graduating in Aerospace Engineering from the Politecnico di Torino and grew through the management of programs and departments (not only in Design, but also in Product & Customer Support and Global Supply Chain) - he was head of the Commercial Fleet Program Management at GE Aviation headquarters in Cincinnati, USA.

"What impressed me the most was the degree of autonomy and responsibility of the team, the collaboration is enhanced and even the productivity index sometimes exceeds the traditional office-based"

“The American experience, among other things, allowed me to value, at first hand, the potential of remote working and the degree of collaboration;" said Atzei, "when I returned to Avio Aero, a true Smart Working program was gradually being developed with the aim of becoming a 'normal' way of working... this definitely helped us to manage the boom caused by the COVID19 emergency, reassured by a positive prior experience, and by the parent company with its consolidated processes.”

On average, according to a recent survey in GE, 55% of people were satisfied with Smart Working and if this figure in Avio Aero reaches 63%, it is mainly due to the team led by Atzei, to the specific skills and digital capabilities of every team member who have contributed to the stability of remote working for over two thousand users. This has also translated into the growth of Smart Working in GE which for Europe, the Middle East and Africa was 100%, compared to 60% of colleagues in the USA who were already used to it.

"Covering this new, additional role from March 2020 was very challenging," continued Atzei: "but it allowed the team to show remarkable abilities. This impressed me in particular in terms of the degree of autonomy and responsibility of the team managers ... a determining factor in the handover phase in which I was involved.

Atzei's praise is directed to the management and implementation of a work plan that has seen practically the entire Digital team, namely around 120 people, working in various directions to put Avio Aero employees in a position to use the company's digital tools in as similar a way as possible to how they were already used to working inside the company.

"We already had a good base of experience behind us, but not all applications had been tested remotely, so part of the team found themselves managing a huge workload in just a few days which under normal conditions would have been completed in weeks or months," says Atzei, unveiling that the criticality at the starting point was the fact that not all employees worked with a laptop or had one assigned to them.

"We set up the work in three steps: install and configure, deliver the material safely, and instruct employees in its use...but without a doubt, safe delivery was the most delicate phase"

And this was the specific task that the Coretech team, led by Giampiero Galli, took on. "A huge commitment especially during the initial phase: we delivered more than 200 laptops to colleagues who generally work with desktop PCs in the office and therefore also needed connective technology to work via Smart Working. So, we set up the work in three steps: install and configure, deliver the material safely, and instruct employees in its use.

Galli's long experience of Information Technology started in 1989 in IBM as a computer engineer and has continued in several GE businesses since 1997; today, he is Digital Workplace Services & Support Sr Director in GE Coretech & Cyber Security, providing support to GE businesses in Spain, Portugal, Greece and Israel, as well as Avio Aero.

"Operational speed was essential and the global team managing procurement from Amsterdam immediately understood the criticality and was extremely cooperative," says Galli. "But without a doubt, safe delivery was the most delicate phase: we managed to deliver all the laptops without physical contact between our technicians and colleagues and, if anyone needed help or clarification, they were able to contact the technician at any time. From there, we monitored and facilitated user adoption and operations, an intensive two-weeks of work that made the Coretech team feel that they are an important asset for the company".

A subsequent level of complexity in the management of this work plan, on the other hand, was related to the variety of technical and IT requirements of users in Avio Aero. "Within IT, we support the business with about 150 different types of software: many of these, for example, are used by just a few users, but who are no less important than others. Many programs then manage machinery and factory processes, and one of our primary missions is to support the design or maintenance of aircraft engines and their components in the aeronautics industry... very often, it is more complex to understand or define a manufacturing or engineering process than to create the software that supports it."

"Our people in Engineering or Manufacturing use CAD or structural calculation programs, and therefore need particularly powerful machines, so we prepared an extraordinary process for them"

Another point of reference for Avio Aero's Digital team, Gaetano Arcuri - with GE since 1999 and at Rivalta since 2013 - is an expert in IT infrastructure as well as Data Science and Big Data. In addition to the title of computer engineer, Arcuri also shares with Galli the systematic (and obvious, if linked to their leader Atzei, who bases his work on this philosophy) adoption of the  Lean principles and continuous improvement: "it helps us facilitate this change and to better organize our activities," he says.

Arcuri's team has therefore guaranteed tailor-made solutions according to the widest variety of needs of the various company teams, which, by their very nature, base their work on sophisticated tools to create aviation products. “For example, some people in Engineering or Manufacturing use CAD or structural calculation programs, and therefore need particularly powerful machines... we didn't have a sufficient number of Workstations immediately available and so we prepared an extraordinary process to allow them to install their own Workstation at home (if they were able to do so through instructions) just like that in their office."

Last but definitively not least, there is cyber security and the prevention of cyber threats. Simone Pezzoli - head of Cybersecurity for Avio Aero since 2018, with experience in Information Security, Compliance and Audit at Barclays Bank UK, Bupa (insurance provider based in London) and PriceWaterhouseCoopers - spoke about the control of risks related to the huge flow of data and information that develops equally (if not in greater quantities) during remote work.

"As for the prevention of cyber threats, in general, our behavior will probably always be the most important aspect of any protection system, both at home and in the office"

"Our domestic infrastructures do not have the protections we have in the workplace, so the risk of information loss in a distributed environment is undoubtedly greater," explained Pezzoli. "On the other hand, digital security is in the DNA of the aeronautics industry where the aspects of IP protection and regulatory compliance are fundamental: the hard disks of our laptops, for example, are all encrypted and systems or computers that contain critical information are never private or domestic. In addition, we also dedicate ourselves to phishing campaigns or campaigns against external attacks on a daily basis, so we always recommend that you do not click on links from outside the GE network and avoid the use of unauthorized platforms for sharing company data, to give just two examples".

On the threshold of an era that sees an important transformation in the work culture, trust in individuals seems to be the best antidote for control even according to the experts: "in general, our behavior will probably always be the most important aspect of any protection system, both at home and in the office" concluded Pezzoli.

Along with responsible behavior, the experts also recommend intelligent solutions for typical domestic situations where more digital needs coexist: “connectivity problems are most often linked to domestic ADSL; in today’s family there are often more people using the network, especially in families with children or young adults... the recommendation is to limit the use of video especially during peak hours and not leave the PC always connected when not needed”.

In one of his recent messages to employees, Avio Aero's CEO pointed out that the possibility of Smart Working was often taken for granted, while in order to ensure the effectiveness of this possibility requires preparation and continuous commitment. Therefore, a virtue of necessity, as Atzei confirms: “we are all coming to the realization that the collaboration between teams is enhanced remotely, and that even the productivity index sometimes exceeds the traditional office-based index... I believe that when the emergency has ended we will have fewer prejudices regarding Smart Working”. 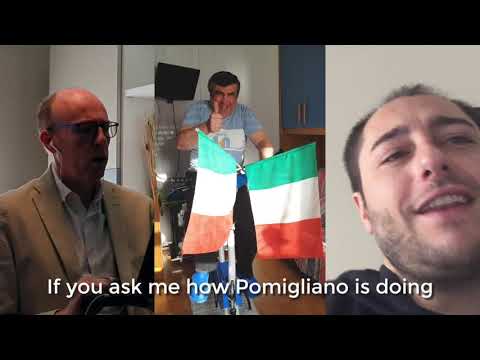 Meanwhile, somewhat surprisingly, even Information Technology nerds, who are naturally at home in virtual environments, can't wait to return to sociality: "we miss interpersonal relationships and we all know how informal communication is very often the basis of problem solving ... How many issues have we solved over a coffee!?”

The European research project for small air transport has contributed new technologies that will soon fly with the GE’s Catalyst, whilst looking ahead at driving an even more sustainable future.