The Grosseto air base is an iconic location of the Italian Air Force. It hosts the “4º Stormo Caccia Intercettori” (4th Fighter Wing Interceptors) and two of the most important squadrons in the Air Force: the 20th Squadron (whose mission is to train the pilots assigned to the Eurofighter line under the coordination of the Combat Forces Command), and the 9º Gruppo Caccia (9th Fighter Squadron), nicknamed “Meraviglioso” (meaning magnificent, it is active since the First World War and with an operative role of surveillance of the national airspace 24 hours a day, 7 days a week).

On arrival at the base, we are surprised immediately as we are greeted by three female military personnel, a sign that the women’s presence in the armed forces is now a reality and is even growing in numbers. Sabrina, “Maresciallo di 3° Classe” (Second Lieutenant), is the aircraft chief mechanic for the Eurofighter Typhoon fleet.

This is a technical role that carries a huge weight of responsibility, consisting of preparing the aircraft for flight, ensuring that it is always available at its maximum operational capability. It is an essential professional role for the operation of such a powerful and complex machine.

“I work in symbiosis with the pilots. We share in-depth knowledge of the aircraft,” Sabrina tells us. “The most exciting experience of my career has been to fly on the aircraft that I prepare for missions every day.” 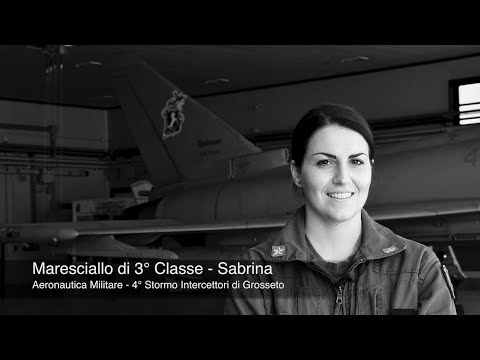 One of the many goals this tenacious woman has achieved since she entered the Officer Training School in Viterbo. In addition to her degree in Political Science and International Relations, she also completed a technical training course that led her to her position working with the most powerful engines in Italian aviation.

“From the outside it may not be so obvious, but there are a lot of women on the line now. Here in Grosseto, for example, a lot of the engineers are women. We bring an overview and attention to detail that are fundamental in this work.” In the engine room of the GEA (Aircraft Efficiency Group), Sabrina has met with Avio Aero's expert engineers - assigned to the Grosseto base for technical support - to develop the EJ200, the consortium's powerful Eurojet Turbo GmbH engine that equips the Eurofighter.

Sabrina, “Maresciallo di 3° Classe” at Grosseto base, is Chief Mechanic for the Eurofighter Typhoon fleet.

"Despite what one might think, the gender difference in Air Force is only perceived from the outside, because in our daily lives we have the same opportunities and we are not kept back from anything”

Sabrina talks about her work naturally, as if it were normal to play this specialized role within a military unit. “In reality, more and more women are looking at a career in the military because of the opportunities it offers in terms of training and international experience. For instances, in a few weeks I leave for a mission to Lithuania, and I was recently in the United States for an international exercise with colleagues from other armed forces who hold my same position. Despite what one might think, the gender difference is only perceived from the outside, because in our daily lives we have the same opportunities and we are not kept back from anything.”

Sabrina has many dreams in her back pocket: some of them involve her career, others her private life, but she is confident that it will not be a problem to reconcile these two worlds. Because with willpower and passion, nothing is impossible.

The era we are experiencing is having an impact on aspects of international politics that affect crucial areas of our lives, the meaningful speech by Nathalie Tocci at the Avio Aero Talk.