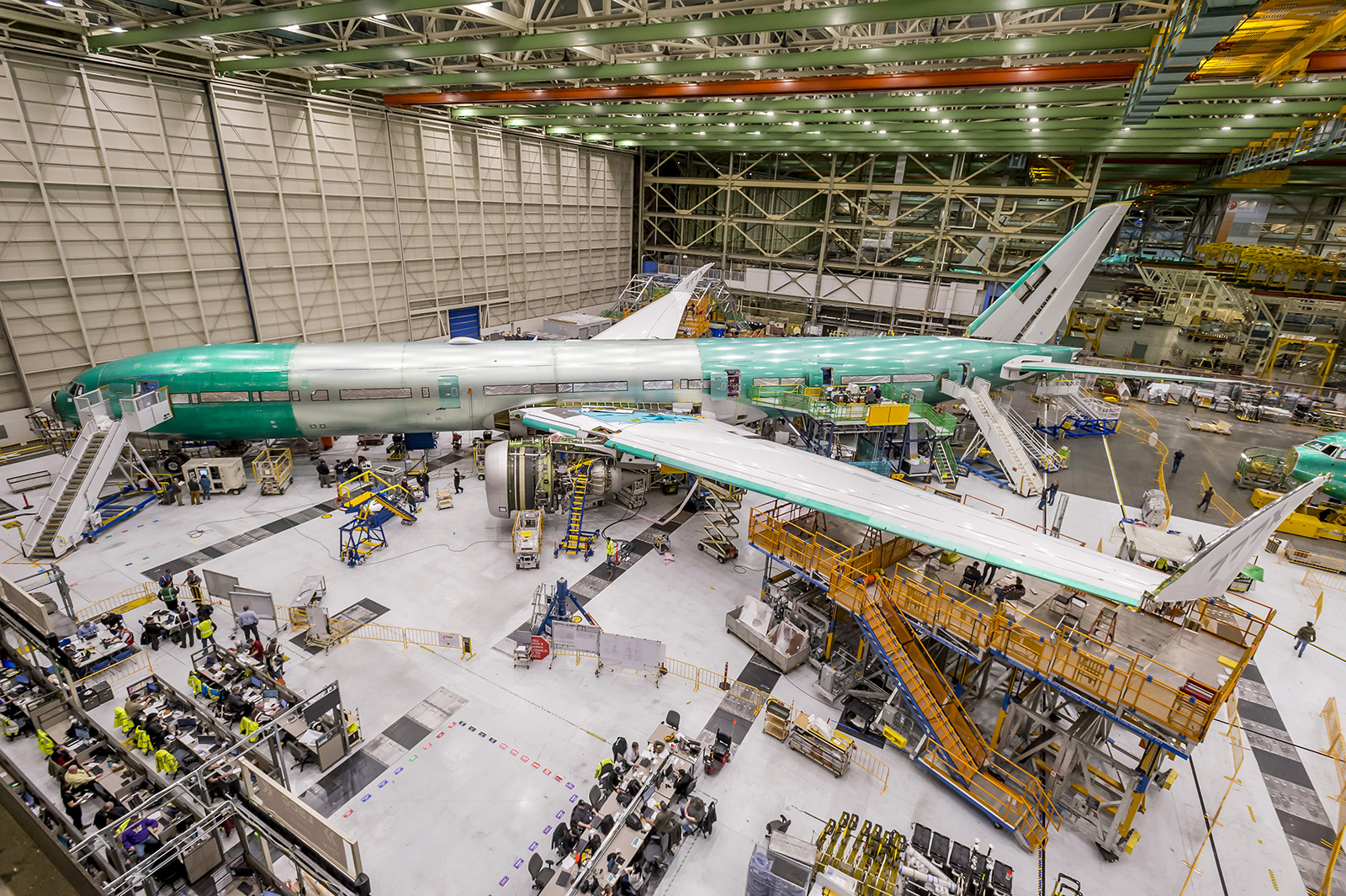 by Tomas Kellner - Editor in Chief of GE Reports

The 777X will be “the most-efficient twin-engine jet in the world, with 12 percent lower fuel consumption and 10 percent lower operating costs than the competition,” according to Boeing. It will come in two variants, the 777-8 and the 777-9. The larger version will seat between 400 and 425 passengers and carry them up to 8,745 miles, farther than the distance from New York to Hanoi. The 777-8 version, which will seat between 350 and 375 passengers, will be able to cover 10,000 miles, more than enough for the Singapore-to-New York route, currently the world’s longest flight.

The GE9X engine is no slouch either. At more than 11 feet in diameter, it is as wide as the body of an entire Boeing 737. The engine has 16 fan blades made from advanced carbon-fiber composites, six different 3D-printed parts. These include the low-pressure turbine blades made from an alloy of titanium and aluminum at Avio Aero's Cameri plant.

Speaking of these blades, Ted Ingling, General Manager of the GE9X program for GE Aviation, said: “we found, quite frankly, that additive manufacturing is quite powerful, especially in the early phases of development, where it allows the design team to iterate on concepts much faster”. His colleagues at Avio Aero (and not just those at the Cameri site) are well aware of this and, apart from the huge accessory drive train and other engine parts; they play an essential role in the entire low-pressure turbine module.

The GE9X LPT inherits the same dimensional primacy as the whole engine, as far as the single module is concerned: since as early as the design stage, GE Aviation’s Italian business has been responsible for supplying turbine components from Brindisi, Rivalta, Bielsko-Biala and the aforementioned Cameri site, but also from industrial partners dispersed across France, Germany and Japan. The turbine housing, together with the six component discs, the stator and rotor blades (including those of the last two stages produced with additive manufacturing), the TRF (Turbine Rear Frame), the Fan Hub Frame and other components of various sizes are assembled in the area of the Pomigliano plant adjacent to the CRO (Component Repair and Overhaul) workshop.

The new year therefore presents great challenges for the Pomigliano team: as the assembly and shipment of the low-pressure turbines for the painstaking test campaign is being completed, work will begin on the so-called production engines. That is, those that will then equip the fleets of end clients: the airlines. More than 700 new GE9Xs have been ordered by, among others: Cathay Pacific, Emirates, Lufthansa, Etihad and Qatar Airways.

In reality, the work has already begun and extensively planned as Gianluca Zecchini, GE9X Assembly Technical Leader of Pomigliano, explained: "in our area of the factory we’ve set up two assembly lines in order to achieve our goal, namely the assembly of 240 LPTs and 240 Fan Hub Frame modules for each year, from now until 2025". For just the 3D-printed TiAL blades produced in Cameri, for example, it is estimated that in the peak period of production, between 2022 and 2023, 60 thousand blades will be produced per year.

For this reason, Avio Aero's 9X teams are growing and increasing their capabilities: in Pomigliano, for example, they are working on the optimization of assembly equipment and the continuous improvement of the warehouses’ layout and workstations according to Lean Manufacturing principles. The latter is the most widespread method for industrial efficiency in the production environment, and in the case of Avio Aero, explained Federica Palma, Production Control & Fulfillment for LPT and FHM of the GE9X, "we are involved in many projects with my colleague Armando Soprano, who is our Lean Manufacturing Engineer."

"We're working on the optimization of assembly equipment and the continuous improvement of the shop’s layout and workstations according to Lean Manufacturing principles."

"These are mainly improvement projects", continued Palma, "actions and methods that we test, evaluate and then apply. They have enabled us to reduce assembly times and increase efficiency, including through waste minimization. Palma and Soprano implement measures in the factory such as warehouse reorganization, and the introduction of so-called "smart" digital tools that customize and facilitate the assembly work or ensure maximum traceability of materials and every single part of the turbine to be assembled (from bolts to the largest part, this module counts up to 7 thousand pieces), including components from different corners of the globe.

Meanwhile, the first LPT module of year 2019 has been already shipped to the United States from Naples Capodichino airport on last January 4: there’s no time to lose.

The first transmission kit produced in Italy for the next generation of civil helicopters, including sophisticated technology to ensure reliability and unique performance.