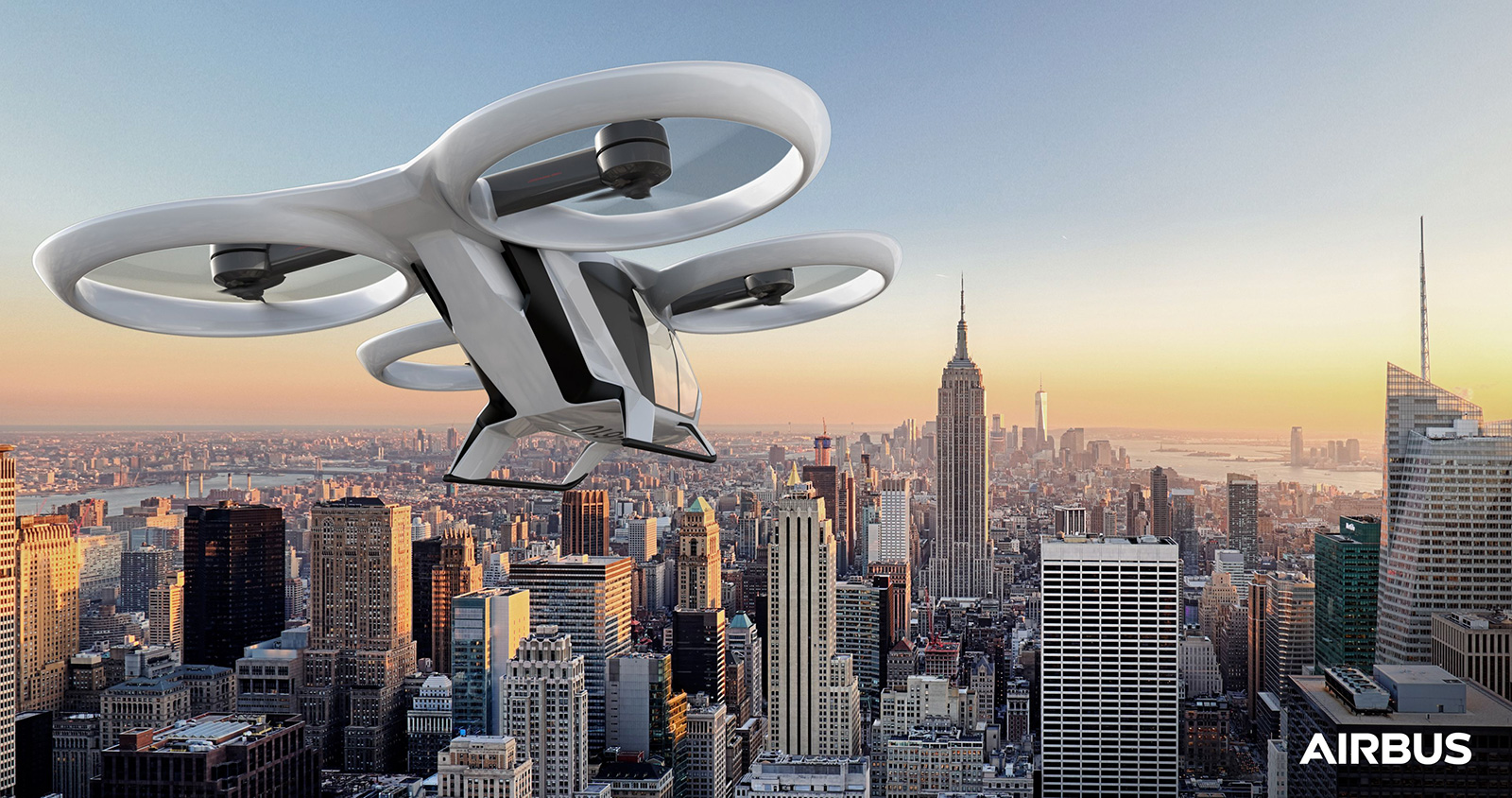 Back to the Future

Travelling from one city to another or crossing megalopolis thanks to artificial intelligence, electric propulsion and hybridization is not just Sci-Fi for aviation professionals.

The year 2020 is just around the corner, but in the most modern metropoles in the world there is still no concrete trace of shuttles or flying vehicles for urban transport. To immediately avoid breaking the dreams of "pre-millennial" generations - those raised by those 80s and 90s literary and cinematographic masterpieces on futuristic cities congested by amazing flying machines – it’s useful to consider some information, coming first from the city of Bari (Italy).

In fact, the Energy Factory Bari (EFB) was established nine years ago in partnership with the Polytechnic. Today, it is one of the main Avio Aero Campus based laboratories and often in the limelight by virtue of the fundamental contribution related to the development of the "digital brain" of the new turboprop engine GE Catalyst. But the business at EFB actually goes further: since its inception, this laboratory focused on the innovation of electrical, electronic and fluidic systems (air, oil, andfuel) for aeronautical propulsion.

"We started by researching electrical machines and power converters to develop enabling technologies for electric propulsion. The ultimate goal is to contribute to  noise and emissions reduction and to implement new operating modes," explains Giuseppe Giliberti, Senior Staff Engineer at EFB. In 2018, as part of a research project, the laboratory, created and ran a technological demonstrator for the propulsion of an UAV (Unmanned Aerial Vehicle) consisting of an electric engine and a thermal engine with a total power of 90 kW.

"Before the development of FADEC with integrated propeller control, which will control the new turboprop engine made in Europe, it was difficult to imagine such a sophisticated digital product for the private and short-haul aviation sector, simply because there were no similar products," continues Giliberti. So, the EFB team skills in that triptych of systems were essential: the electrical system of the engine uses sensors to acquire and transfer a whole series of measurements (pressures, temperatures, flow rates, torque, and levels) to FADEC that serve to implement the engine's control logic. The breakthrough is how these data are used, how they are deciphered and how they are combined to provide answers or forecasts about the status, operation and performance of the aircraft in a very short time.

"Before the development of FADEC with integrated propeller control it was difficult to imagine such a sophisticated digital product, because there wasn't anything similar in general aviation"

Predictive science and avionics are now established resources for commercial aviation, on scheduled flights or on medium- to long-haul aircraft that commonly connect places and passengers. At least since the 1960s, avionics has studied and provided solutions for air transportation, i.e. for medium-large aircraft and the engines used: well-known systems and devices, such as black boxes, or less common, such as the QAR (Quick Access Recorder). The latter includes all the instruments which collect and process raw data of the engine and the aircraft on the ground and in flight, for the benefit of safety and operational efficiency. They are essential tools for airlines and control towers, as well as for pilots who interact with us from the cockpit.

Advanced systems and tools that enclose advanced intelligence, therefore are very expensive, and whose effectiveness for monitoring and predictive capacity is increasingly needed on board aircraft for private transport, both for leisure and business. This is why, the aviation industry is moving in this direction, investing in technologies dedicated to this type of aircraft.

"In aviation, saying in ten or twenty years means saying tomorrow... from a technological point of view" comments Cristian Lai, Controls Sub-Section Manager at EFB. "In fact, for several years now we have witnessed the intensification of private flights and we have heard of the exponential growth of private transport on short-haul aircraft. For this reason, Lai, together with the team in Bari, has been pursuing for years the "fly by wire" mission: that is, to control the engine or even the entire aircraft through a single electric cable, with the appropriate redundancies. Their work continues, aimed at consolidating technologies that enable full digital authority over the aircraft engine, increasingly integrating with avionics solutions, managing power and thrust through an automatic flight control system and finally hybridizing flight.

Lai has no doubt that private aviation, small short-range aircraft, helicopters and UAVs (Unmanned Aerial Vehicles, also known as drones) will not only need data-based control and prediction systems but will probably move towards fully electrical or hybrid propulsion. This view cannot be refuted when one considers the hundreds of helicopters that fly over Singapore, Rio or Mexico City on a daily basis. "Not only do the major players in the aeronautical sector work on these technologies, but also the major car manufacturers are protagonists of an exciting and unprecedented approach to aeronautical companies and their technical expertise in this field," concludes Lai.

The good news for the aforementioned generations is that the futuristic metropolis does not risk the end of the legendary Atlantis, although the empirical concreteness of engineering still invites us to keep our feet firmly on the ground to consider each element. "On the one hand, the Bari experience confirms that the virtualization of the flight - realized through data extracted, transmitted, processed and constantly monitored - enables the main objective of the complete integration of the aircraft with its only source of energy, the engine," explains Luca Bedon, Advanced Technology leader for Avio Aero. "On the other hand, the level of technology and performance of all-electric propulsion tells us that, for now, this solution is limited to small air transport (from 2 to 8 people for example, ed.), while for the commercial aviation we should expect hybrid architectures with different solutions depending on the market segment”.

In essence, simplifying a whole series of technical factors examined by Bedon, it is clear that a fully electric airliner is unthinkable as of today, simply because its batteries would occupy almost the same volume as the aircraft. In particular, on this last point, Bedon adds that "the energy density increase, which is the volume and weight reduction of an electrical power source, is one of the key challenges: there are several others, like the miniaturization of certain basic electrical elements and the capacity to transfer efficiently electricity. These represent priorities as well”.

It takes a lot of vision, and there are at least 3 other elements to consider very carefully along with the technological elements: the economy, aviation regulation and cultural impact. In fact, technology focuses on improving the hybrid or "fully electric" performance with respect to the shape of the aircraft itself: in essence, the small private aviation will be less and less characterized by classic aerodynamic shapes, with large wings and rudders, but we could move towards systems of “distributed propulsion”.

Flying vehicles with six, eight or ten propellers of different sizes, that take off vertically (otherwise it would be complicated in the city) and that push and direct the aircraft: in this scenario, digital controls and total integration of engine and aircraft become necessary.

Secondly, however, it is the economy, the market, which gives chances to evolve future air transport solutions, attracting investment and generating an economic return. “It is certainly not new that aviation giants such as Airbus, Boeing, or Rolls Royce have long been strongly interested and active,” says Massimo Castorina, Strategy Sales and Business Development Leader for Avio Aero, “but also several SMEs and Start-Ups have already brought projects for flying machines to the tables of large aeronautical companies. In 2018, there was a boom in new projects.” Even large industrial companies that have never been involved in propulsion in their history, but that hold a strong leadership and capacity in the electrical and electronic field, such as Siemens for example, show more than one interest in such innovative turning points for aeronautical propulsion.

Private aviation will be less and less featuring classic aerodynamic shapes: flying vehicles with six, eight or ten propellers of different sizes, that take off vertically, push and direct the aircraft.

“The discriminating factors continue to be the capacity and range of transport” says Castorina, “but the infrastructure available in each city for operations and electrical recharging also contribute for various reasons, once again we are not ready for real demand. Moreover, today the economic evaluation and the extent of investments are always influenced by convenience and at this time the hybrid propulsion does not yet provide an adequate economic advantage over the thermal propulsion.”

In addition to all this, there is no certification protocol in place to date on the part of airborne institutions, such as EASA and the FAA in the first place, which certify technologies and regulate flights at national or international level. “The European Commission, driven by the first projects that already fly, has begun to move" continues Castorina, "and recently published the first draft for altitudes up to 150 meters in the city."

Finally, although common imagination is influenced and, in part, fascinated by the perspective of a flying evolution in urban mobility, the issue of cultural impact must be taken into account. If it is true that urban infrastructures will require a certain transformation, it is equally unbelievable that in a few years every car driver will turn into an experienced pilot.

And a consideration that immediately follows is: are we ready to be flown by a virtual pilot, even if it is interlocked to our commands, regulated and connected with ground monitoring?

Two engineers, both eager pilots, inside the test facility that allows the most realistic flight simulation for the Catalyst engine, applying real components and weather conditions.