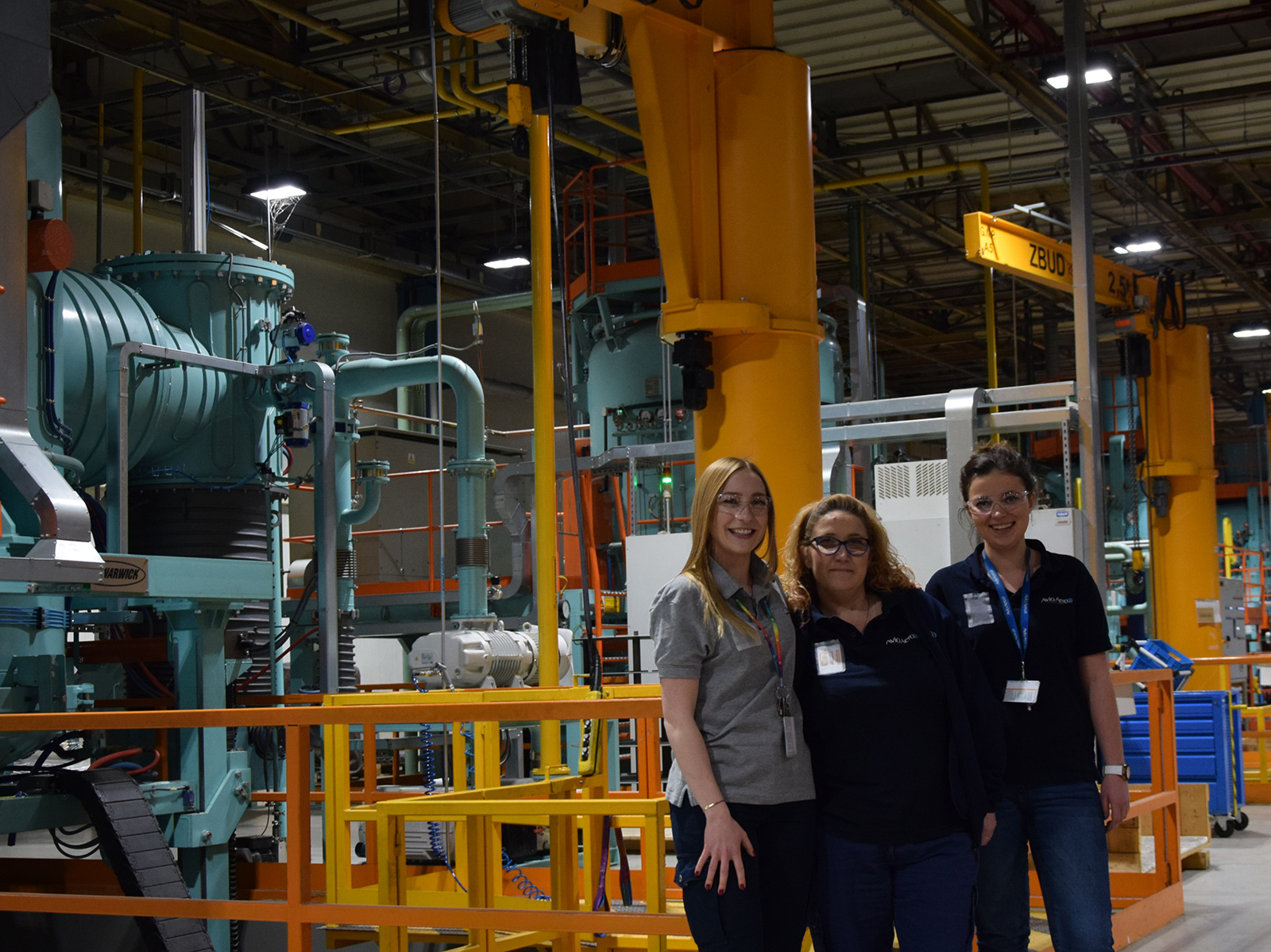 From Polska with... STEM!

Avio Aero Polska holds extraordinary stories of women able to break down any stereotype, right on the shop floor as well as in the more traditional manufacturing roles.

It is 9pm on a Monday night, inside a metalwork factory in Poland. How likely is it that a significant number of women can be found on the shop floor, or even in management roles within manufacturing?

Very likely, if it is the Avio Aero plant in Bielsko-Biała: here inspiring stories of aviation industry’s professional women can be discovered.

Bielsko-Biała is the center of excellence for GE Aviation's European brand for the design and production of turbine blades for aeronautical engines, where stator vanes and blades of the most popular and high-performance engines for military aircraft and helicopters (such as EJ200 and T700) and also for the new generation of civil engines (GEnx, GE9X, LEAP) are produced.

Anna Ślusarz is the first Cell Supervisor found at the Bielsko factory, at state-of-the-art automated lines that produce blades for the low-pressure turbine of the LEAP engine. In total, 21 lines employ 100 workers over three shifts and Anna (23) is responsible for one of these teams. "I graduated in Management & Production Engineering from the University of Technology in Katowice (about 100 km from Bielsko-Biała, ed.) at the age of 21 with a thesis on GE Power."

Anna's story is decidedly unique and filled with surprises, as you clearly can see from her eyes and her smile when she starts to talk about her studies: "As a child, my dream was to be a doctor, while my younger sister wanted to be an engineer ... in the end, when we grew up, we exchanged jobs!" And she goes on talking about her graduation thesis and how a career at GE was recommended to her by a special sponsor.

In fact, thanks to a GE Power engineer in Poland - a young Spanish man who was working on electronic control panels and was about to change jobs at the time - Anna discovers the potential of career paths at GE as she is finishing her graduation thesis. "I chose to write my thesis on GE Power and then I met Miguel, my current boyfriend, who always recommended a work experience at GE," continues Anna, "but right after my graduation, he accepted a move to Scotland with another company."

At that point Anna, becoming more than friends with Miguel, moves to Glasgow. And albeit no longer a GE employee at that time, Miguel yet encourages her to apply for OMLP (Operations Management Leadership Program). "At the beginning of my time in Scotland, I found a job in the furniture industry (not a very exciting role but at least as an engineer): there were only three women total," says Anna, "and after a while, I finally applied for OMLP at GE Aviation Caledonian, but unfortunately the program didn't start there."

So Miguel identifies another opportunity for an OMLP application, this time at Anna's hometown, Bielsko-Biała. “I was a bit of a fighter because we had just moved to Glasgow, but Miguel had an exceptional memory of his GE experience and still enthusiastically suggested to don't miss out the opportunity... so I decided to take the interviews.”

Wojciech Korczyk, LEAP production manager in Bielsko-Biała for Avio Aero and Anna's supervisor, still remembers her interview: "At the very beginning I doubted that she was technically ready for our sector, but as the assessment progressed, despite her young age, she showed us all her determination and her soft skills that fully convinced us of her high potential."

"Being able to rely on a manager who supports you, like Wojciech did with me, is paramount", Anna adds, "indeed, as soon as I was hired I was only worried about living up to the team’s expectations because of my young age, and not because I’m a woman..."

Anna's first job rotation (the OMLP program calls for a total of three different roles for each new young employee) comes within the LEAP team at the Bielsko plant: as a Manufacturing Engineer, she is in contact with industrial data and the huge volumes of the new engine program.

Anna spends six months in this role, then Wojciech decides that it’s time to get in the game: he appoints her Supervisor of the production cell and entrusts her with a team of operators, the relative high-tech industrial machines and its challenging production targets. "In this job you don't stop for a minute. On the shop floor I keep my step counter on my phone all the time ... I get a lot of physical exercise," says Anna smiling, feeling satisfied in her new role.

"Compared to the previous rotation, this is much more my thing. I like to be in contact with people, work with large teams, solve problems that seem insurmountable. It is better to try than to regret not having done anything!" Anna is bewitched by the dynamism, sense of responsibility and spirit of initiative that her work requires, and so, while she imposes herself with confidence and competence in her new role, she sweeps away all insecurity. "Seeing the result of my work on the final product is what excites me most, now I can't imagine working anywhere but in production."

Anna Ślusarz joined Avio Aero in February 2018. With her, there was a small group of other new graduates entering the industrial world in one of the largest global aeronautical companies. Among these is Kaja Kastelik. She is 25 years old and becomes Anna's friend just while both face the job interviews. In the end, Kaja is hired in Bielsko-Biała too

"I have always been highly fascinated by science and technology. That is why I graduated from the AGH University of Science and Technology in Krakow in Materials Science with a specialization in Engineering of Steels and Special Alloys," says Kaja. In fact, she completed her thesis in Switzerland at EMPA, one of the world's leading research and development institutes for materials science and technology.

"When I finished my university degree, I was offered a PhD position, but I would have to wait a year to start working. In the meantime, the opportunity to apply for OMLP at Avio Aero and in my country arose... and I could not miss the opportunity," continues Kaja who, like her new friend, suffers the charm of the aeronautics industry.

Kaja's work differs from Anna's: she is now in her second rotation in the OMLP program and she is in charge of Heat Treatments. The latter industrial processes improve the properties of products’ raw metal materials by means of an intense processing at very high temperatures in gigantic vacuum furnaces.

"This is exactly what I love to do because not only it perfectly matches my academic background but it even allows me to keep contacts with many wonderful colleagues, which was not possible while studying materials and phenomena in the laboratory or investigating materials’ structures with electron microscopes” says Kaja, who coordinates about 60 people in this area at Bielsko.

"Unlike the LEAP area, which was revamped and expanded with the engine's commercial boom, Heat Treatments were born with the Bielsko factory and therefore have a strong tradition and work culture," confirms Małgorzata Fajkis, who is responsible for this area in Avio Aero Polska. "Additionally, the work we do here has a strong male character, speaking in stereotypes, due to the high temperatures near the furnaces or the handling of large engine parts," explains Małgorzata, who was the first female manager at the Bielsko plant, "but what I always try to convey to the team (workers and supervisors) is to overcome any cultural bias ... to understand that there are no male or female tasks."

The diversity that pervades the Heat Treatments team is felt in the men's attitudes, too, by the fully equal professional relationship with colleagues, and this is confirmed by Kaja's experience. She talks about the classic cultural bias laying around the geographical area she lives in, likewise it slightly influences the global society.

"Initially, as happens in all work groups with a long tradition, I had to gain respect and esteem from my colleagues," explains Kaja starting from the beginning. "Moreover, the fact that the area actually had a strong masculine character required addressing certain stereotypes or prejudices... but I expected it, especially as a supervisor. In the end, it was enough not to dwell on it, to be myself and not to take things personally: if you make yourself known for who you really are, success is almost assured!"

Kaja is very enthusiastic about her experience. She traces the social difficulty in accepting diversity, and relative bias, as they’re rooted in traditions and local cultures. However, she recognizes that things are changing and, just as is occurring in her company, also within the institutions the progress goes on. "Recently the new president of the Slovak Republic was elected. This extraordinary woman is the first female president in the history of Slovakia." Beside role models, more still needs to be done. "In some companies women applying for a job still have to be careful to admit they have some maternity plans. It is deeply regrettable that pregnancy and maternity still have such a negative impact on women’s career. It is crucial that women and men have the same opportunities from the start of the job search, or at least receive maximum transparency” concludes Kaja.

"It is deeply regrettable that pregnancy and maternity still have such a negative impact on women’s career. It is crucial that women and men have the same opportunities from the start of the job search"

Since April, Kaja's team has also been able to boast the first qualified female operator for the brazing process (until recently exclusively male, a rather tiring process), named Anna Zieba. "I've been working at Avio Aero for 7 years, and about in industry for about 20 years", says the latter, "I started in the rotor blade production area, and before that I worked in the installation and electrical industry. I chose the industrial sector even though I had completed studies for the medical and nursing profession. In the 2000s it was very difficult to find a job in Poland due to the high unemployment rate." It is easy to imagine how much harder it was for a woman at that time.

Anna Zieba had heard good things about the aeronautical sector, and Avio Aero, so as a local from Bilesko, she tried her luck and applied to work in the aircraft engine production plant. "I've only been working in Heat Treatments for a few months. Initially, I was worried about the expectations and complexity of the work, but I must say that the work environment and team colleagues put me fully at ease. I also had coaches, like my colleague Szymon Pezda, an expert in this role with extensive experience, who has helped me a lot during the implementation period."

Meanwhile, at the beginning of May, three more women qualified as operators for this process, allowing Bielsko-Biała to even increase the chances of telling STEM (Science Technology Engineering and Maths) stories like those of Anna Ślusarz, Kaja Kastelik and Anna Zieba.

For readers who are particularly interested in the story of Anna and Miguel, and yearn to know more, we can only say that now he is working in the Netherlands for a company that produces airport facilities and that, while working in different countries, they continue to plan their future together ... who knows what destiny has in store for them.

A Referee in Quality

One of Avio Aero's Supplier Quality Engineer, once his day between the office and shop floor comes to an end, takes on the official role of National Basketball Referee.

The two engineers selected for the 100 Flights program to celebrate GE Aviation's 100th anniversary and welcomed as guests at the Paris Air Show, tell the story and feelings of their dreamy days.