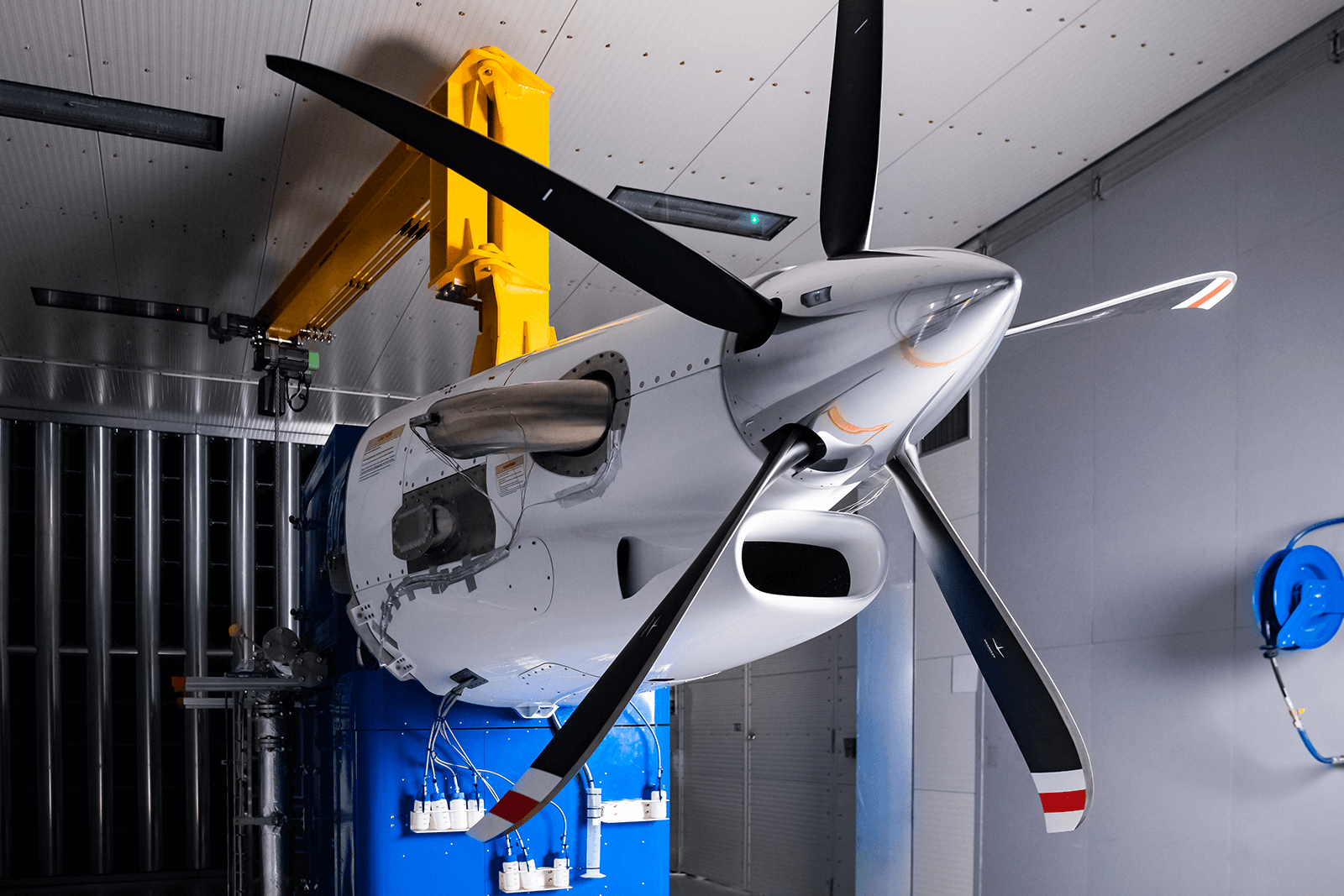 Everything is ready to go, in a beautiful corner of Puglia, called Salento. In July, Avio Aero's second additive manufacturing plant officially started 3D printing production of parts for the new Catalyst engine for the Cessna Denali light aircraft..

The new additive area in Brindisi is specialized in the production of additive technology for melting metal powders via laser beams (technically known as Direct Metal Laser Melting or DMLM), was inaugurated on December 22, 2018. Many Brindisi-based employees attended the ribbon cutting ceremony - after six months of structural work that completely transformed the old industrial building into a futuristic factory.

Up to ten GE Catalyst components will be produced in this area. The engine's first flight is scheduled for the end of 2019. It is the first turboprop engine in the world with almost 30% of its internal metal parts 3D printed. In Brindisi, work has already begun on three of these ten additive components. This number will continue to grow as the number of GE Additive-Concept Laser machines DMLM does.

Currently, the new area employs about 12 people, including operators, production engineers, "designers for additive" and process material experts. The team is  led by Additive Manufacturing Leader, Dario Mantegazza."The number of people on our team will double and, when we are at full capacity, we expect volumes to exceed 300 engines per year.”

Mantegazza has held a number of roles with increasing responsibility, where he learned about Electron Beam Melting (EBM) - the other additive technology that uses an electron beam to melt powder - at the Cameri plant (Novara), where the turbine blades for the world's largest commercial engine, the GE9X are produced.

"When I was at Cameri, we facilitated the introduction of EBM technology to GE, as well as learning and coaching for industrialization," explains Mantegazza, "and for last couple of years, we have also been learning how to optimize and industrialize DMLM technology. Now we are finally ready to apply it in production for the first products." The technological and operational interchange that Mantegazza talks about is at the heart of the collaboration between the teams in Italy and those at the Additive Technology Center (ATC), an ultra-modern plant established in 2015 about 10 km from GE Aviation's world headquarters in Evendale (Ohio, USA).

The ATC is a center dedicated entirely to the technology that has broken the traditional paradigms of industrial production, as well as of mechanical design. Approximately 85% of the products processed at the ATC are destined for the aviation market. “We are currently working on products for about ten military and civil aircraft programs, including the newest and most advanced ones, such as the LEAP, GE9X and of course GE Catalyst. In addition to production, Digital IT, R&D and Engineering teams work here, too," says Antroine Townes, Plant Leader at GE Additive's cutting-edge center.

At the ATC, additive manufacturing processes are developed using both DMLM and EBM technology for internal customers (such as GE's global businesses) and, of course, for external customers. At the same time, the potential of the new technology is explored in terms of applications, materials and digital capabilities (additive machines are digital from the start, ready to generate, process and transmit data). Visiting the ATC is like taking a 10-year leap forward in the industrial time dimension.

Townes also knows Mantegazza well, from the first time his Italian colleague stepped foot in the ATC, at the beginning of 2018. "We began working together about two years ago and will continue to do so for about five years in all," says Townes. "It is absolutely to our mutual benefit. We exchange knowledge and nurture our trust in each other. Our work on the Catalyst program is to transfer the production of all additive parts from Ohio to Brindisi. We started with the smaller ones and we will eventually get to the bigger ones. At that point, Brindisi will be self-reliant and dedicated to Catalyst. Then we will continue to deal with other aircraft engines that already have parts in additives, and those that will have new ones in the future."

Today, in Brindisi, there are already three DMLM machines in operation, as well as two machines dedicated to post processing (all the ancillary operations for additive production such as finishing and cleaning of the excess metal powder, which is usually reused). By the end of this year, this machine fleet will double and, between 2022 and 2023, Brindisi will reach full capacity with another 15 DMLM machines in operation.

Between 2022 and 2023, Brindisi will reach full capacity with a total of more than 20 DMLM machines in operation, they expect the production volumes to exceed 300 engines per year.

"ATC is a key partner, a great Lean Lab," says Mantegazza. "During this transfer process we collaborate daily with Antroine and our American colleagues. This is the only way can we guarantee the full maturity of the products that enter production in Brindisi. Furthermore, in Avio Aero, we can also rely on the industrial optimization and development activities performed within our laboratories partnered with universities, just like they do, for instances, at TAL."

In this process of continuous multidisciplinary exchange between Italy and the USA, a key role in ATC is played by the Transition Leader in Brindisi, by Sandra Babylon. "The engine program in question is brand new. There are numerous challenges and the technological content is highly complex because no one has ever ventured into this industrial enterprise before," says Babylon, whose job is to ensure that the transition proceeds in the right direction that the production processes, quality, and shapes fit perfectly.

"From the very beginning, everyone I worked with at Avio Aero seemed to be highly motivated, eager to fully integrate technology and products", adds Sandra Babylon. "The Cameri experience is certainly useful, but at this level of innovation, the solutions to problems, and therefore the opportunities to learn, are continuous.”

Perhaps it is this aspect, more than others, that attracted Cristina Napoli who, before joining Avio Aero thanks to the program dedicated to young engineers (GE Edison), graduated in Aeronautical Engineering, and worked for Siemens and Magneti Marelli in the engineering and R&D departments. "I've been at Brindisi for three years, after spending a few months at the headquarters in Rivalta, and in November 2017 I visited the ATC for the first time working on the transition of materials and learning all about the process.

"Additive manufacturing allows you to think and act in a completely new way, not only in terms of the design of objects, but also for the materials from which they are made"

At that time, Cristina was facing her first ever factory experience. "Initially, I had no notion of the work I was going to do and, moreover, I entered the world of production through a totally new technology, compared to traditional ones. In fact, additive allows you to think and act in a completely new way, not only in terms of the design of objects, but also for the materials from which they are made. In other words, what I do in Brindisi. With additive, the materials are an essential part, and for GE Catalyst we use up to four different types of metal alloys."

Today, Cristina is a Materials Expert in the shop. She is the engineer who collaborates (right on the factory floor with other production engineers, laboratory technicians and DMLM machine operators, who are responsible for the control and optimization of metal powders used in 3D printing. "You learn much more this way. It goes far beyond the classic image of the engineer glued to a screen. You are no longer a lone individual; you interact with everyone," adds the young professional.

The additive manufacturing revolution is not just technological, industrial, and geometric; it also has a significant influence on how work is performed and on workers’ skill sets at every level, which continually evolve. "Awareness of the capabilities that additive offers is growing continuously," concludes Mantegazza. "Operators are also maintenance personnel with enhanced digital programming skills. The synergy in factory management is also greatly improved and the team intertwines its individual skills continuously. EBM and DMLM are not competing technologies; on the contrary, each has its own unique advantages. And the beauty of it is that we have not discovered them all yet."