This year's International Air Show at Le Bourget, Paris, from 19 to 23 June, could not have got off to a better start. On the very first afternoon, GE Aviation announced agreements with partners and customers worth about 17 billion dollars, thanks to the sharp jump in orders for the LEAP (which is to replace the CFM56 on Airbus Neo and Boeing 737 Max), totaling 742 engines. And thanks to the Service offering. Avio Aero provides the case and various low pressure turbine stages for the LEAP engine.

The first day was one of meetings, mainly with its partners Safran, Leonardo and EPI, for Avio Aero too. During the traditional show-opening press conference, David Joyce underlined that he "could not be happier" and pointed out that "Avio Aero is about to become an Aviation center of excellence for additive manufacturing with the EBM technology."  The GE Aviation CEO then emphasized that Avio Aero developed this specialism in parallel with leadership in key products including power and accessory drives, and low pressure turbines.

“The GE9X low pressure turbine TiAl blades will be made out of additive using the additive EBM process at the Cameri plant, we already have it running in the test engine" Joyce concluded.

And expectation is hotting up around the GE9X, while the next giant of the skies to be fitted with the 9X, the Boeing 777-X, is also eagerly awaited. Naturally Boeing is at the show with its chalets and display area, dominated by the 787-10 Dreamliner and the new 737 MAX-9: the first day of the event also saw the announcement of the new 737 Max-10 model (to be equipped exclusively with the LEAP-1b), which has already clocked up 240 orders from more than 10 airlines. About was granted an exclusive interview with the Dreamliner's head of engineering, Wayne Tygert, who thanked “Avio Aero for its work on the GEnx”, alluding to the accessories and inlet and transfer gearboxes.

The opening day also featured celebrity visits such as that by French President Emmanuel Macron, who flew on the Airbus A400M, the promising European military transport aircraft driven by four TP400 propeller engines with the largest power drive ever built in the western hemisphere, designed and produced at Avio Aero.

Judging from the first day, there is lots more success in store! 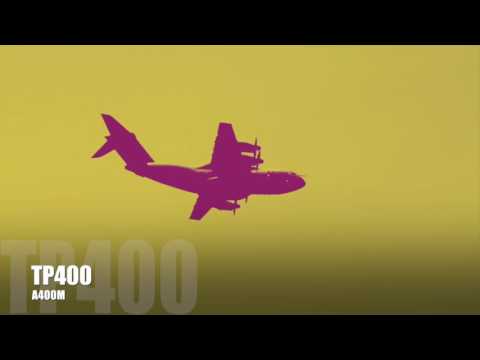 Our engineers and technicians have developed a service process with major operational benefits for airlines, all thanks to the thermal spray.