At first glance, the headquarters of MT Propeller, located on the edge of the small Straubing-Wallmuehle airport in the green Bavarian town of Atting, offer an impactful view yet from the first floor of the building where the management and engineering offices are located. Indeed, the entire corridor to the right runs along offices and meeting rooms, while to the left it overlooks the assembly shop on the ground floor. Bright, impeccably tidy and very attractive, it’s the place where the propellers for aircraft are subjected to the final operations.

This environment, from the very start, conveys the idea that you are not just in front of a typical, efficient German factory: it promises much more. Such impression is confirmed as soon as you learn the history of the company itself. Founded in 1981 by the pioneer Gerd Muehlbauer, aviator and expert builder and maintainer of propellers of all kinds, at the time it employed six people and was housed in a single building.

Today, MT Propeller is the premier European company to design and build 2 to 5-blade propellers (also, the first to successfully manufacture and test 7 and 9-blade propellers) and is the second largest in the world. It now employs a total of 220 people and, totally, more than 25.000 propeller systems are in service with more than 75.000 blades (over 37 propeller systems, with about 280 different models of blades, FAA and EASA certified), on the most diverse types of aircraft and also hovercrafts.

That initial building now houses the captivating headquarters. Over the years four other buildings have been added for production, service and maintenance, logistics and research, while a sixth building is currently under construction. Furthermore, the company is now organized into three business divisions. In 1999 it acquired Avia Propeller, a Czech manufacturer with head offices right across from GE Aviation Czech (where the assembly and testing of GE Catalyst takes place), and also has a service shop in DeLand, Florida (USA).

MT Propeller's dynamism is perfectly personified in its Vice President and General Manager, Martin Albrecht. A graduate in mechanical engineering, Albrecht has always been passionate about aviation, has test pilot's license (CAT 1) and a civil commercial pilot's license, has been a six-time national aerobatic champion, and built three two-seater aircraft on his own. "In the company, we are three test pilots: in addition to us, the Chief Engineer Josef Eberl, they’re also designers from our engineering department, made up of 14 engineers," he says proudly, introducing his colleague Tina Halbritter, aeronautical engineer and experimental pilot.

"We study all aspects of the propeller: the materials, the wear to which it is subjected with the blades, their shape and size so as to improve and evolve the product over time," he explains brandishing a huge hovercraft blade. These are the largest propellers, 6 meters in diameter. "A little more than twenty years ago, when I started, we produced about 750 blades a year. Today, we build about 6500, thirty blades a day."

At the heart of Albrecht and his team's philosophy, and success, is a total devotion to the engineering and design of these objects. This perfectly matches the unique production process, because it combines the craftsmanship of the first component that made it possible for man to fly (the propeller) with technological innovation. "All our propellers have a wooden core, but are capable of better performance than metal ones. Just for example, one of our 5-blade propellers weighs the same as a 3-blade metal one, but reduces vibration and noise by 30 to 50%," says Albrecht. "It depends on the number of blades and how the weight is distributed into them. We tend to concentrate it more on the base, where blades are attached to the hub." MT Propeller produces the complete propeller system, with the hub (i.e. the central hub, available in 37 models and made from a forged aluminum), its interior, the central cone and even the control systems.

MT Propeller's production process is the next great show one can see in this corner of Bavaria. When you enter the production building, you immediately feel like inside one of those Scandinavian wood factories, where attractively designed furniture is created. Maybe this is due to the high ceilings, the woody smell and the cottage-like shape of the building, but lots of beech and spruce wood arrives and is made into planks, ready to be carved like blades, although first it runs through Computer Tomography machine (CT), identical to those in hospitals, for inspection.

MT Propeller blades are made of natural composite materials. Beechwood is the base, strengthened by spruce which it is joined to. You can see the dark veins that rise, thinning along the remaining very light color wood surface. This core material of the propeller, through subsequent processes and work, is coated with carbon fibers or composite materials, strengthened by aluminum joint to the hub for aerospace applications and edged with nickel cobalt. The result is five times stronger than aluminum and twice stronger than steel.

"In 2016, we tested a 7-blade propeller, confirming performance and noise levels similar to those experienced when flying a jet, so we named it the Unducted Prop Fan!"

"The combination of design and materials is the formula that gives our propellers their high performance in terms of noise emissions and vibration control," says Albrecht. "We love working with OEMs (Original Equipment Manufacturers), but 50% of our customers are private individuals who fly and request our systems for their aircraft." In fact, MT Propeller's operates in the Business & General Aviation market: this attention and direct interaction with the customer is highlighted in an area of the company's website, which hosts a sort of "open forum" where customers from all over the world send feedback on products and share their experience.

Albrecht is very pleased with the collaboration agreement signed with Avio Aero to equip with Bavarian propellers the extra-US military applications of the new engine with a totally European passport: in the coming months, in fact, he first test campaigns could start at the ultramodern plant in Brindisi or in the new test room in the Czech Republic.

"We expect the innovative GE Catalyst turboprop to have a 5-blade propeller. But, depending on power, noise, speed and altitude requirements, we may also consider a 7-blade propeller," says Albrecht. "In 2016, we tested a 7-blade propeller, confirming performance and noise levels similar to those experienced when flying a jet, so we named it the Unducted Prop Fan!" 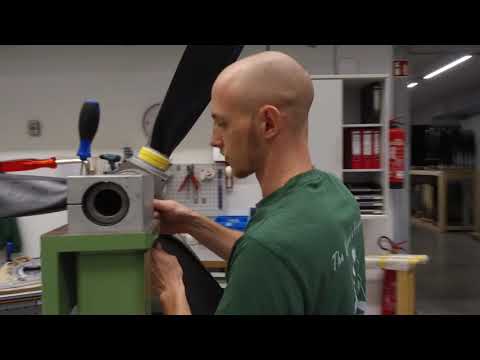